A profile of patent applications filed in Mozambique 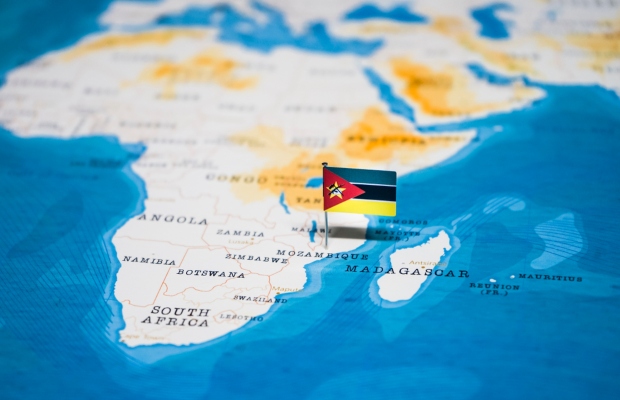 Careful analysis of data shows that a strong IP system may be a gateway for sustainable economic growth in Mozambique, reports Vítor Sérgio Moreira of Inventa International.

Inventa has carried out a study on patenting activity in Mozambique, presenting some statistics highlighting a profile of the main patent applicants, and the technologies they relate to in the country.

To be granted in Mozambique, a patent application may be directly filed before the Mozambican national patent office (IPI) or can be filed before the African Regional Intellectual Property Organization (ARIPO), where an applicant requires Mozambique as a designated state.

Identifying information regarding patent activity in Mozambique is not an easily performed task, managed by means of some clicks and an internet search engine. The IPI does not publish the bibliographic data of filed patent applications. The patent applications filed in Mozambique are not searchable by means of Espacenet, which is the most complete free patent database, because IPI does not provide data to this source.

The internet country code of Mozambique (.mz) does not feature in the list of countries codes indexed in the Espacenet, in which a country code consists of two letters indicating the country or organisation where the patent application was filed or granted.

Our source of information for performing this study was the statistics database of the World Intellectual Property Organization (WIPO) and the Official Bulletin of Industrial Property (OBIP), which is prepared by IPI and may be acquired directly before the office. The OBIP comprises bibliographic data of patent applications and information that refer to the patent numbers, titles, applicants and inventors of patent applications in Mozambique.

We have identified the patent filing activity before the IPI in Mozambique from 2010 to 2019, from data derived from the WIPO statistics database, as it is presented in Figure 1. It is possible to observe a slight growth trend for the overall quantity of patent applications filed directly before the IPI, and it appears that residents have contributed to a significant share of this set of patent applications. 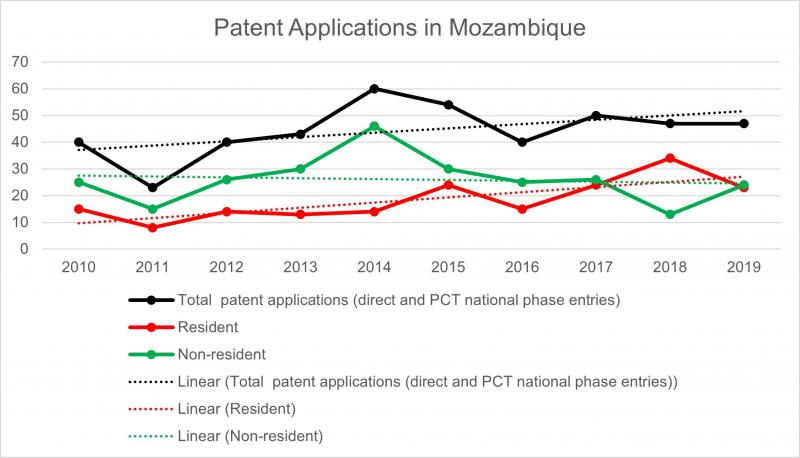 The patent data was retrieved from the WIPO statistics database and the 2019 population data was obtained from the World Bank website. Patenting activity in Mozambique compares poorly with that of its neighbour, South Africa, which shows patenting activity almost 20 times higher according to the indicator presented in Table 2.s

Data retrieved from the OBIPs released by IPI

Therefore, the main route used by applicants to file patent applications in Mozambique is ARIPO, a regional office empowered to grant patents and administer such rights on behalf of contracting states that are part of the Harare Protocol.

We processed the bibliographic information regarding patent applications retrieved from OBIPs published in 2020 to recover further information about the main applicants and the main technical fields referred to in the set of 183 publications.

“Patent applications in Mozambique are slightly more numerous than in neighbouring countries, the United Republic of Tanzania, Zambia, and Zimbabwe, but substantially inferior to those in South Africa.”

The top 10 applicants are presented in Table 3. Table 4 presents the top 10 countries where the applicants of the published patent applications live. Despite the significant and remarkable share of resident applicants, this may be explained by a reduced flow of filings in Mozambique having a non-resident applicant, rather than an intense use of the patent system by residents.

Our analysis shows that multinational companies, mainly operating in the pharmaceutical, information technology and telecommunications industries, are the predominant users of the patent system in Mozambique. Such companies seek to assure protection by means of patent applications filed before ARIPO.

Filings of patent applications by Mozambican residents are carried out mainly by individuals and universities or public research organisations.

Patent applications in Mozambique are slightly more numerous than in neighbouring countries, the United Republic of Tanzania, Zambia, and Zimbabwe, but substantially inferior to those in South Africa. Therefore, there are opportunities to boost the use of the patent system by Mozambican companies, and the IPI may carry out a significant role in this process.

In tandem with several countries in Africa, IPI faces challenges as it needs a proper internet platform where the patent applications and their status are available for the public. This is in addition to the requirement for complete information regarding granted patents, refusal decisions and integral documents regarding the patent specifications and their prosecution from filing to final decision.

Considering the insurgency of the Islamic State group in northern Mozambique and other challenges related to infrastructures and quality of life in the country, it is likely that investments in the IPI and in the patent system do not loom large on the government’s agenda.

However, it seems that a strong IP system may be a gateway for sustainable economic growth in Mozambique.

Vítor Sérgio Moreira is a patent engineer at Inventa International. He can be contacted at: vmoreira@inventa.com