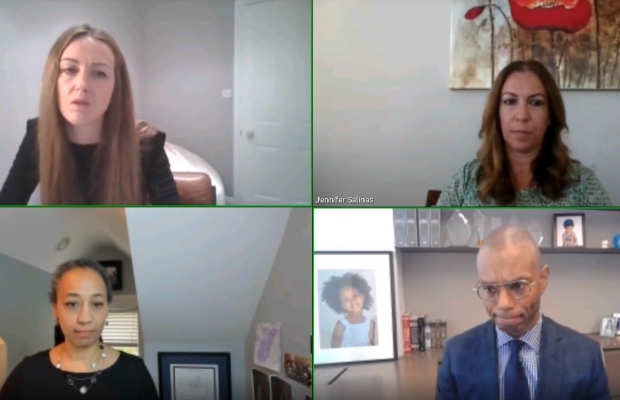 “The industry is making progress but it is slow and painful, and unfortunately, because it is slow, we are losing many people who are questioning whether there is a path for them to get ahead,” said Laurie Charrington, associate general counsel at Intel, who took part in the session, “Walking the talk—companies and firms striving for legal diversity in tech and IP”.

During the session, moderated by Kirkland & Ellis partner, Katie Coltart, and introduced by Influential Women in IP editor Sarah Morgan, Charrington was joined by fellow Kirkland & Ellis partner Ellisen Turner, and Jennifer Salinas, executive director of global litigation at Lenovo, to discuss how law firms and in-house legal teams are responding to the Black Lives Matter movement, as well as diversity efforts.

Despite many years of D&I efforts, the panel discussed how the number of black and ethnic minority (BAME) lawyers in senior positions have remained depressingly low. “It’s something that we need to change, and that we need to take aggressive urgent action on now because if we don’t, I don’t want to even think about what will happen,” said Charrington.

The panel also explored the particular dearth of lawyers of colour in the IP sector. “When it comes to IP, our number (for BAME lawyers) is less than 2% and for Latinos in particular, it is less 0.2%....this is something we obviously need to change,” said Salinas.

To promote D&I, the panel agreed that law firms need to avoid solely relying on data, and instead focus on conversations with diverse lawyers within the firm, and direct investment into D&I programmes within the firm.

“Sometimes you need to use brute force and you need to put processes in place to get past the bias, and that bias will remain unless you have leaders who are real allies or who reflect the diversity in the legal market,” said Charrington.

“Partnerships and relationships are critical. It cannot be just a numbers game,” said Turner. “When there is a focus on the numbers, you know that the firm and client are not really serious about it; they are just focused on the headlines and just superficial satisfaction,” he added.

The panel also called for more support from leaders at law firms. “The motivation for D&I can’t just come from clients; it has to come from the top. When the leadership is supportive, that percolates through every level the organisation….that creates an environment where you have to think ‘wait a minute… what am I doing to disrupt this cycle; what am I doing to improve things here? How can I be actively inclusive, rather than inactively inclusive?’” said Turner.

The panellists spoke movingly of their own experiences of racism and unconscious bias, and how important it was for lawyers from majority cultures to understand the challenges that BAME lawyers face on a daily basis.

“In court, very often the opposing counsel, typically a white male, will proceed through their whole arguments, with a few questions from the judge, and then sit down,” said Turner. “But very frequently, I will go one sentence into my argument and I will get interrupted, and you have to question why it happens nearly every time I’m doing a hearing…we have to question why it seems to be more acceptable to interrupt women and minorities when they’re speaking,” he said.

The Black Lives Matter movement, he said, was a direct result of a failure to fully address the legacy of past historic wrongs. “The movement that we are seeing around the world and, more specifically in the US, is because we never fully reckoned with racism and state-sponsored bias and segregation that is part of our history,” he said.

Being an ‘only’ “feels horrible”

The panel also broached the challenges of being ‘doubly diverse’, of being both racially diverse and female. “For the majority of my career I was an ‘only,” said Charrington, who for a long time was the “only black attorney” in her firm.

“How does it feel? It feels horrible. It really makes you question whether you belong. And whether there is a long term path for you and if you will advance up the ranks.”

She added: “As the only black attorney in my firm for a very long time and especially when you see nobody in the leadership ranks who looks like you or with a similar background, it really makes you question why? It is really hard to be the ‘only’.”

Salinas drew attention to the pressure placed on lawyers from diverse backgrounds.“I think there has to be an acknowledgement that it is exhausting when you are a diverse lawyer in a law firm. It is physically, emotionally and mentally exhausting. First, you will always hear directly or indirectly, someone making a snide remark about you being a diversity hire, or somebody being hired because they are diverse.”

The pressure on BAME lawyers was often unfair, and did not necessarily lead to rewards or recognition, the panel agreed.

“We are shouldering a lot of pressure and stress. We can’t do this alone. If you are the first to be diverse, especially in the legal profession, you are not only tasked with being a really good lawyer but also tasked with championing D&I efforts. And the reality is that we will do it because it is important to us; it is emotional,” said Salinas.

LSPN Connect is the membership programme for the Life Sciences—to watch on this session and for more information on joining, visit www.lspnconnect.com

Did you enjoy reading this story? Sign up to our free daily newsletters and get stories sent like this straight to your inbox.

Sound bite: Is sampling fair use?