UDRP or URS: the choice is yours 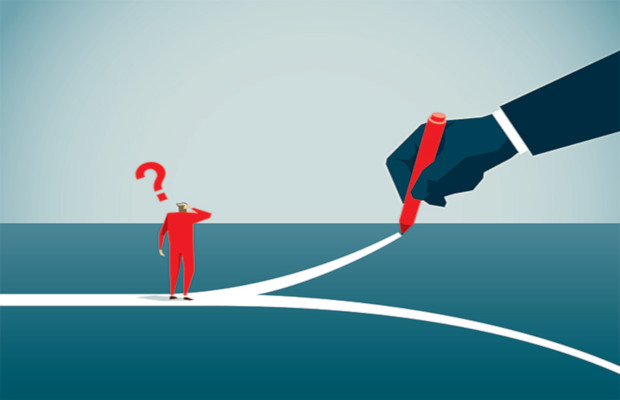 The UDRP and URS mechanisms for tackling cybersquatting each have their own pros and cons, so picking between the two may depend on the specific nature of the case. Victoria Friedman and Steven Shape of Dennemeyer & Associates report.

When seeking to recover a cybersquatted domain name, many trademark practitioners are unsure whether they should proceed with the Uniform Domain-Name Dispute-Resolution Policy (UDRP) or the Uniform Rapid Suspension System (URS) process. Which is the right solution for you?

The URS was drafted not to compete with the UDRP, but to complement it—the URS almost exclusively focuses on the new generic top-level domains (gTLDs). The URS process is generally similar to the process under the UDRP.

For both, the trademark holder must prove that:

The domain name is identical or “confusingly similar” to the legally held trademark;

The domain name has no legitimate rights; and

The domain name was registered in bad faith.

Under the URS, an administrative review is conducted within two business days of the submission. Upon completion of the review, the registry operator for the domain name freezes the domain and sends notice to the cybersquatter. The cybersquatter has 14 days to submit a response. In order for the trademark holder to prevail in the proceeding, it must prove not only that the domain names are identical or “confusingly similar,” but that it: (i) holds a valid and current registration; (ii) holds validation via court proceedings; or (iii) has specific protection by an effective treaty or statute at the time the complaint is filed. 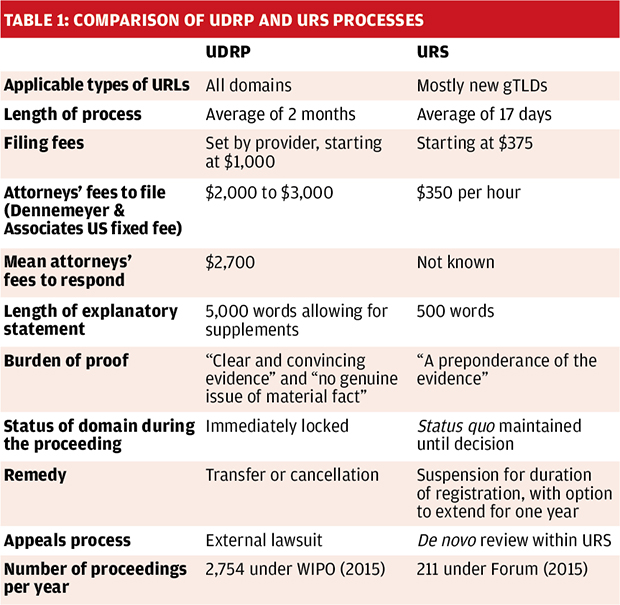 The URS does not provide a ruling to transfer or cancel a domain name; rather, a suspended domain name will direct the visitor to a URS placeholder page for the duration of the registration period with the option to extend the registration period for one year. The URS also contains an appeals system, where either party may request a de novo review of the case within 14 days of the final ruling. An appeal of the URS decision can also be followed or supplemented by a UDRP and/or a civil action.

The UDRP and URS have additional distinctions that make them appropriate for different types of cases (Table 1). For example, the URS costs approximately $1,000 less than the UDRP procedure—with the complainant paying for the services under the UDRP, and the losing party paying for the services under the URS. The UDRP takes an average of two months to complete, whereas the URS takes about 17 days.

The URS also applies almost exclusively to new gTLDs and is a comparably more rigorous procedure with a higher burden of proof than the UDRP. Because of this, the URS is best suited for clear-cut cybersquatting cases in the new gTLDs.

An immediate remedy is available through the URS, with the accused domain name frozen at the beginning of the process and potentially suspended for the remainder of its registration. The UDRP does not provide an immediate remedy but does allow for the cancellation or transfer of the domain name from the cybersquatter’s possession. This grants trademark holders the ability to utilise the UDRP to enforce the recovery of more desirable domain names while using the complementary URS to monitor and suspend those that are less desirable.

"The UDRP does not provide an immediate remedy but does allow for the cancellation or transfer of the domain name from the cybersquatter's possession."

Some trademark holders have voiced concerns regarding the ability to write a compelling argument given such a limitation and over the additional time incurred by the URS appeals system. These concerns are reflected by the significantly fewer cases that have been filed under the URS—less than 19 cases per month in 2015; as opposed to the more heavily used UDRP—with an average of 200 cases per month in the same year.

Despite the numbers, the URS nevertheless maintains its advantages. Its lower filing fee and expedited remedy may provide a better alternative for trademark holders that are contending with the costs of constantly-expanding domain portfolios. Although the UDRP is likely to remain the preferred process for the recovery of most domain names, the number of cases filed with the URS will probably continue to grow alongside the increasing number of new gTLDs.

Victoria Friedman is managing partner at Dennemeyer & Associates. She specialises in client counselling, procurement, and management of IP. In her trademark practice, Friedman manages international portfolios for global brands in various industries. She can be contacted at:  vfriedman@dennemeyer-law.com

Steven Shape is managing partner at Dennemeyer & Associates. He is a registered patent attorney and electrical engineer who has represented technology companies in complex IP litigation and foreign patent and trademark prosecution matters since 1982. He can be contacted at: sshape@dennemeyer-law.com