To Dream the Impossible Dream 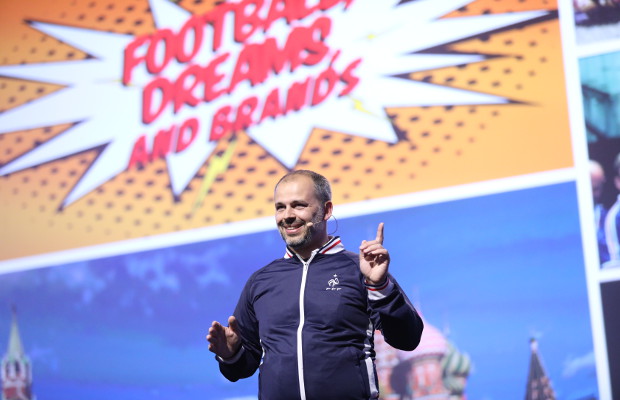 INTA’s 2019 Annual Meeting kicked off with messages of aspiration, and a call to arms to do good. Sarah Morgan reports.

“When I was a kid I had a dream,” began INTA President David Lossignol, Global Head of Trademarks, Domain Names and Copyright at Novartis Pharma AG (Switzerland), as he kicked a football on stage during the Opening Ceremony at the Association’s 2019 Annual Meeting yesterday. “My childhood dream was about my home country France winning the FIFA World Cup.”

He said: “Manchester United is not just a football club. It’s also a brand. And all brands have dreams. Brands are inspirational. They represent a lifestyle for their customers—or fans—to aspire to.”

Mr. Lossignol used his passion for Manchester United to illustrate why we come to love and become loyal to brands: “We believe in their dreams.”

This message directly coincides with INTA’s Gen Z Insights: Brands and Counterfeit Products study, released on May 16, which found that the next generation of consumers believes brands should do good in the world.

“For years, we’ve witnessed the rise of socially conscious, belief-driven consumers, and brand owners have taken heed of their calls. But this relationship between brands and consumers, centered on the expectation of doing good, runs deeper than this … it’s built on trust,” Mr. Lossignol said.

He added that when it comes to winning the loyalty and trust of Gen Z, brands must demonstrate a strong “commitment to social values such as environmental protection, equal rights, and philanthropy.”

This is why one of the three pillars of INTA’s 2018-2021 Strategic Plan is to reinforce consumer trust and why Mr. Lossignol has assembled a Presidential Taskforce called “Brands for a Better Society.”

The goal of the Presidential Taskforce is to show how brands can help society at large by moving beyond the traditional message that trademarks merely protect corporate interests and companies’ profits.

“We want to remind people how trademarks help to communicate quality and support corporate social responsibility efforts, for instance,” he said. “One way in which the role of trademarks is being diminished in the marketplace is close to home for us in this room. This is counterfeiting.”

An important part of INTA’s mission is to educate consumers and brands on the threat counterfeits pose to trademarks, consumer trust, and the wider society.

Tackling the proliferation of counterfeiting is an “impossible undertaking if we only address the supply. It is critical but we must also fight this battle on the demand side,” said Mr. Lossignol.

“We have an opportunity here to make counterfeiting socially unacceptable on a global scale,” Mr. Lossignol declared. “We need to change perceptions and attitudes towards IP and counterfeit goods. This is especially true for the younger generations, set to become the consumers of the future.”

This ties into INTA’s Unreal Campaign, a consumer campaign that raises awareness among young consumers about the dangers of counterfeit goods and the importance of trademarks and brands. This is accomplished largely through educational presentations in schools around the world.

As a call to action for brand professionals globally, Mr. Lossignol announced the Unreal Challenge—“an opportunity for the entire INTA community to significantly reduce the demand for counterfeits and support the incredible work of the Unreal Campaign Committee.”

“The challenge for you, he said, “[is to] become a volunteer and give a student presentation … Imagine what we can accomplish if all 35,000 of us sign up.”

As a direct outcome of the Gen Z study, INTA has expanded the target age group for the Unreal Campaign, from 14 – 18 year olds to include those up to 23 years of age which, as Mr. Lossignol noted, creates even more opportunities for members to take on the challenge by going not only into high schools, but into colleges and universities too.

He concluded: “A world without counterfeits is not an impossible dream, if we work together.”

INTA Looks into the Future

Etienne Sanz de Acedo, CEO of INTA, entered the stage following a video in which eight university students—all belonging to Gen Z—shared their views on how the actions and values of brands influence their purchasing decisions.

The message from young people was clear, Mr. Sanz de Acedo said: “Brands must lead in dealing with critical issues facing humanity and the planet.”

He told attendees that brands and trademark professionals must adapt to the challenges faced by society in order to maintain the confidence of young people – the next generation of consumers.

Emphasizing his point, Mr. Sanz de Acedo cited the Gen Z Insights study, which revealed that 76 percent of respondents said they would prioritize being an ethical shopper, while 85 percent said brands should aim to do good in the world.

He also touched upon a number of global trends that are altering the environment in which brands are operating, including changing consumer and employee behaviors, and emerging technologies and innovation.

Referring to an article by the late Sidney Diamond, the first trademark law specialist to serve as Commissioner of Trademarks and Patents for the US Patent and Trademark Office, published in INTA’s The Trademark Reporter in 1978, Mr. Sanz de Acedo provided a snapshot of today’s intellectual property (IP) industry. The article’s title, “The Next 100 Years, What Will It Be Like in 2078 AD?” seemed an apt expression of how the global IP community needs to be looking into the future and taking steps to prepare for challenges that lie ahead.

He also contrasted challenges facing the IP industry, such as misunderstandings about the value and contribution of IP to society and the fact that innovation cycles are happening faster than intellectual property office registration cycles, with opportunities to educate policy makers and explore new IP assets and rights.

He noted that IP is in good shape, but that issues remain around accessibility to IP services for small- and medium-sized enterprises (SMEs). “IP is not adapted to and therefore not adopted by SMEs and entrepreneurs,” he said.

Concluding his remarks, Mr. Sanz de Acedo called on members to recognize the importance of making a social contribution beyond just IP.

“It is with each and every fall that I became a better person,” said Michael Haddad of Lebanon in his keynote address.

Mr. Haddad, a professional athlete, holder of three world records, motivational speaker, environmental advocate, and social entrepreneur, was paralyzed at the age of six in a Jet Ski accident. More than 75 percent of his body is completely paralyzed.

But, Mr. Haddad explained, the element of choice gave him the power to break his own barriers and face his fears.

"Choice gave me the power to connect to the outer world from prison to taking my first step and starting to believe in myself and believe in my capabilities as a person,” he added.

In 2013, Mr. Haddad initiated the Cedar Walk, and walked 19 kilometers with a cedar tree on his back from Bcharre to the Cedars Forest of Tannourine in Lebanon. He planted the tree upon reaching the finish line.

“With each and every tree that we plant, we are planting a new future for our children and our children’s children,” he said. “If we don’t act now [on climate change] we have a very big problem to face in this coming millennium.”

Three years later, Mr. Haddad became a United Nations Development Programme Climate Change Champion, to advocate the UN’s 2030 Agenda and raise the issue of climate change all over the world.

“If we don’t meet this vision, humanity will be facing a catastrophic position,” he said, adding that he has pledged, together with a group of supporters, to walk 100 kilometers at the North Pole to raise international awareness for climate change.

He closed with a powerful call to arms: “INTA is leading in intellectual property—you are the center of trust and brand loyalty. It’s time for us together to work on a social development program and lead by example. Ladies and gentlemen, if I, Michael Haddad, am standing here in front of you, advocating for climate change and development goals, imagine what you standing on your feet could do.”

Nine years ago, when INTA last graced Boston with its presence, 8,400 registrants attended the Annual Meeting. What a difference nearly a decade can make, noted the 2019 Annual Meeting Project Team Co-Chairs in their welcome remarks at the Opening Ceremony.

Co-Chair Cynthia Johnson Walden, Principal at Fish & Richardson P.C. (USA), pointed out that the waterfront area near the Boston Convention and Exhibition Center, where the Meeting is being held, has been substantially built up since INTA’s last Annual Meeting here.

“Boston is full of fabulous restaurants. Get some fresh seafood … and stop by Mike’s Pastry for cannoli,” she said.