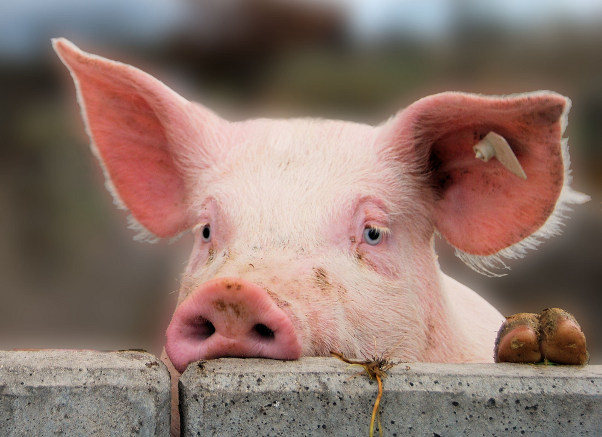 A group of pigs has been paraded outside the Italian Parliament in protest at the growing number of products entering the country with bogus indications of origin.

The parade was organised by the country’s farmers’ union Coldiretti which says Italy is being undermined by an increase in counterfeit products and low quality non-authentic food, including salami, claiming to be from Italy.

The stunt, performed on Thursday, December 5, formed part of a seasonal campaign called “The Battle for Christmas: Choose Italy.”

Coldiretti has launched the campaign in an attempt to encourage Italians to buy national products authentic to Italy.

It says the meat production industry provides 105,000 jobs in an economy where unemployment is high and that for every 1,500 foreign hams imported, one farmer’s job is lost.

A Geographical Indication provides a beneficial tool for consumer products used to prove their authenticity, tying a particular product to the region or country which produced it.

Italian Parma Ham is one of the most famous examples, alongside Champagne in France and Scotch Whisky in Scotland.

But Coldiretti says around 33 percent of food products sold in Italy and exported from the country are made using foreign imports despite being marketed as ‘Italian’.

According to Bernard O’Connor, partner at the Brussels office of Italian law firm NCTM Studio Legale Associato, the issue of ‘made in Italy’ has become a big talking point.

“Italy feels it has phenomenal food brands which it needs to protect,” O’Connor said, adding that it was a problem which stretched beyond food and into textiles and designs.

As part of the protest, farmers also travelled to Italian borders to search trucks where they found food due to be processed in Italy which included Lithuanian pork, German mozzarella and Austrian wheat.

German ham was also found which was bound for Modena, famed for its production of cured meats.

O’Connor, who divides his time between Brussels and Milan, said there were two methods for misleading consumers in the origin row.

“You can be 100 percent fraudulent and pretend the food you’re making and selling is authentic by labelling it in that way, or you can not specify where it comes from but package it in red, white and green [Italy's national colours], so that people make the assumption despite there not being outright fraud committed,” O’Connor said.

“What the farmers are complaining about is outright fraud, some of these products have been produced in Germany and distributed as though they were from Italy.

"The stunt could have two results, either the farmers who carried out their own enforcement will face sanctions or it could increase the pressure on the government to think about proper regulation.