Influential Women in IP: what is success? 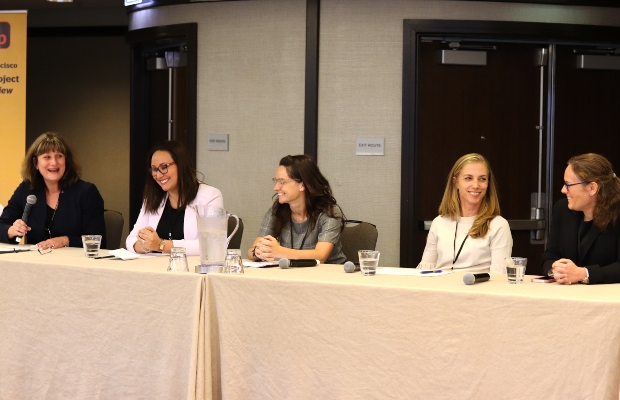 “We don’t have to define success as making our way up the ladder as quickly as possible. If we have the career that we want, that is more successful than reaching the top,” said Emily Collins, vice president of Kilburn & Strode’s San Francisco office last week.

Collins was moderating a panel session, “The Current Landscape for Women in IP: How Far have we Come and Where are we Going?”, during WIPR’s Influential Women in IP event in San Francisco on Tuesday, October 15.

However, while the definition of a successful career is different for every individual, making partner at a law firm can present a range of opportunities.

“I don’t care about having the P [for partner] after my name. It’s not the title, but it’s what it gives me access to. It opens doors to rooms I’d like to be a part of,” said Kimberly Maynard, counsel at Frankfurt Kurnit Klein & Selz.

Jones Day partner Patricia Campbell agreed, adding that partnership opens up the ability to present yourself differently to the client.

“It’s a pragmatic reason why people want to make partner. But does everyone? Definitely not,” she said. According to Campbell, even if you don’t want to follow the partnership track, if you’re very good at your job, you will ultimately reach an ownership position (whether that’s in a business sense or owning the outcome of what you’re doing).

Making partner can be a goal for many, but the reality is that a legal career comes with a 24/7 expectation. This can make many women feel that they can’t ‘have it all’, said Sarah Schaedler, partner at Kirkland & Ellis.

Catherine Escobedo, of counsel at BARLAW - Barrera & Asociados, added that 28% of big law firms in Peru have no female partners, despite many of the female lawyers wanting to make partner.

“It’s okay if you want to work and work and be the top lawyer in the world. That’s up to you,” said Escobedo, who works for a firm led entirely by women.

But rising to the top is not a simple task. “We’ve seen a lot of situations where a woman puts forward an idea, just to be swallowed up by men,” said Campbell, adding that there’s a lot of subtle gender discrimination, including different salaries, the choice of first chair in litigation and who is in the pitch team.

Collins believes that a lot of discrimination can stem from a women’s lack of confidence and questioned the panel on how women could be empowered in the workplace.

Schaedler responded that mentoring was critical from her perspective, a sentiment the panellists all agreed with, while Campbell also suggested modelling as a way to empower women.

“Women see for the first time a generation of powerful women above them. That’s not what I had when I was younger. You have to put your personal capital on the line to advance women. To advance women who are junior associates to partnership, you have to say they are indispensable to the practice and give a piece of yourself,” she explained.

As firms push for more gender diversity across all aspects of the business, there’s a growing impetus from outside too.

“You’ve all been on pitches where the general counsel says don’t come to me if you don’t bring a team that looks like the demographics of the US,” said Campbell. “From an economic perspective, it’s incredibly important for business development to reshape gender equity in the firm.”

Maynard added that many studies support the finding that gender diversity improves your business. “No capitalist system in the world doesn’t want a better result, so why wouldn’t you put in better ingredients that generate better results,” she said.

Schaedler concluded: “There’s legislative support for [diversity] and boards are required to have women on them. If we’re at that level of support, it’s clearly reached the clients a long time ago.”

Influential Women in IP: juggling childcare and planning for curveballs
08-11-2019