Indigenous artists ‘not getting a fair deal’ 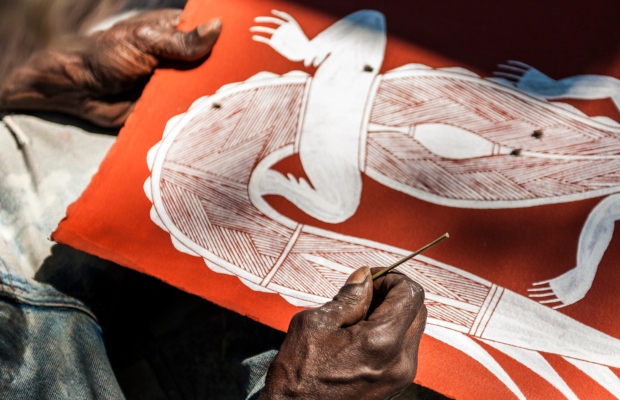 An Aboriginal artists’ group in Australia has urged Indigenous artists to stop selling their copyright, arguing that they are being exploited by large corporations.

The Wangaba Roebourne Art Group, based in Pilbara, Western Australia, says it will no longer sell copyright for individual pieces of work, and will only license or sell pieces directly from now on.

“History shows our artists are not getting a fair deal with selling their IP rights,” a statement on the collective’s Facebook page said.

Christina Goodman, the group’s operations manager, told ABC News that she would like to see other Aboriginal and Torres Strait Islander artists pursuing the same policy.

“People are buying copyright, but they're not paying for what it's actually worth," she said,” Goodman said, adding: "One person got a 50-year contract and only got paid $7,000 (US$5422) for copyright—that artist cannot use that image in anything for the next 50 years."

Members of the group also reported seeing their work reproduced on social media platforms like Instagram without credit or permission.

"I get a lot of emails and a lot of messages saying, 'Oh, we love your photos, we don't have access to a lot of Indigenous maternity photos, but we don't have a budget for it,'" said Pilbara artist Bobbi Lockyer.

"But if it's not readily available and it's hard to find, that's all the more reason you should be paying us for it,” Lockyer said.

IP Australia has acknowledged that Australia’s IP laws may need to be updated in order to better protect Indigenous communities.

“IP laws focus on individual ownership and do not reflect the emphasis of custodianship over proprietorship that is fundamental within Indigenous culture,” said a government state published alongside the report.

Policy makers have also grappled with how to resolve a dispute over ownership of the copyright for the Aboriginal flag. Indigenous businesses have reported being sued for copyright infringement, after the IP rights for the design were licensed exclusively to WAM Clothing. WAM’s owner had previously been involved with a company fined $2.3 million for selling fake Aboriginal art.

An Australian Senate committee established to investigate the issue has urged the government to reject calls to seize the copyright for the flag, arguing it would set a “dangerous precedent”.

The Senate’s select committee instead advised the government to pursue a “negotiated solution” with WAM, and the flag’s designer Harold Thomas. But the opposition Labor Party has insisted that the government’s right to seize the IP must be kept on the table if a resolution cannot be found.

US trademark modernisation: what it means for foreign brand owners