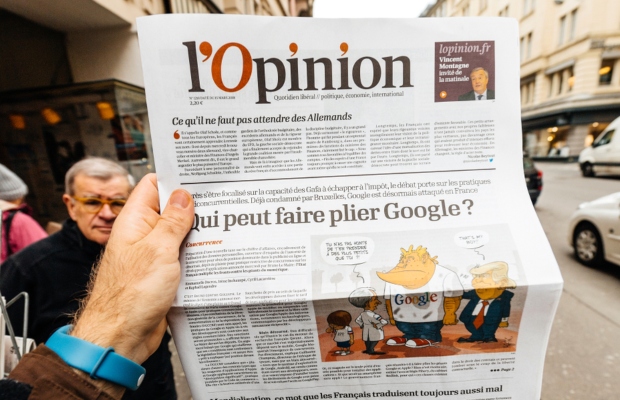 Members of an association of French publishers will receive remuneration from Google when their content is re-used, according to an agreement announced on Google France’s blog on Thursday, January 21.

The agreement establishes a framework within which Google will negotiate individual licence agreements with members of the Alliance de la Presse d'Information Générale whose publications distribute “political and general information” (such as news).

Under the agreement, Google will remunerate the publishers according to specific criteria. This includes the contribution that publication makes to political and general information, the daily volume of publications, and the monthly internet audience of that publication.

Pierre Louette, CEO of Groupe Les Echos—Le Parisien and president of the Alliance, said: "After long months of negotiations, this agreement is an important step, which marks the effective recognition of the neighbouring right of press publishers and the start of their remuneration by digital platforms for the use of their online publications."

Neighbouring rights were established by Article 15 of the EU Copyright Directive, though the Directive allows for the terms of the use and related remuneration to be negotiated between the parties.

In July 2019, France became the first country to ratify the EU Copyright Directive which was approved by the EU Parliament in March of the same year. The controversial law holds digital platforms liable for infringements committed on them.

In April 2020, French competition regulator Autorite de la Concurrence said that Google is obliged to pay publishers and news outlets for reusing their content. The Paris Court of Appeal confirmed the same in October 2020.

Last week, Google said the agreement with Alliance is “within the framework determined by the Competition Authority”.

Google launched News Showcase, which initially had $1 billion behind it, towards the end of 2020. According to the technology company, it helps participating publishers share their expertise and editorial voice through an “enhanced storytelling experience”.

Speaking of the agreement between Google and the Alliance, Sébastien Missoffe, managing director of Google France, said: “This agreement is a major step for Google. It confirms our commitment to press editors within the framework of French law on neighbouring rights.”

He continued: “It opens up new perspectives for our partners, and we are happy to contribute to their development in the digital age and support journalism.”

The EU is not the only jurisdiction seeking to protect publishers’ neighbouring rights; last month, Australia announced plans to introduce a landmark law which will force Google and Facebook to pay publishers for news content.

In response, Google threatened to stop its search engine from working in the country and Facebook said it would remove its news feed.