IP in Greece: a primer 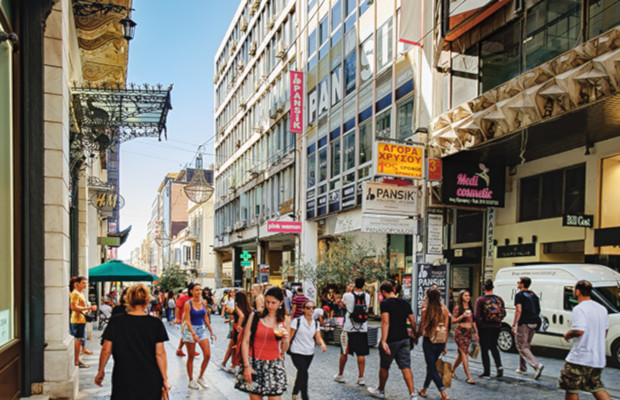 Maria Athanassiadou and Fotini Kardiopoulis of Dr Helen G Papaconstantinou and Partners provide a rundown of the IP regime in Greece, from registration to enforcement and more.

According to Law 1733/1987, patentable inventions must be new, involve an inventive step and be susceptible to industrial application. A patentable invention may concern a product, a process or an industrial application. An invention is considered as involving an inventive step if, having regard to the state of the art, it is not obvious to the skilled person.

It will be considered as susceptible to industrial application, if the subject matter can be made or used in any field of industry. Exempt from protection are discoveries, scientific theories and mathematical methods, aesthetic creations, schemes, rules and methods for performing mental acts, playing games or doing business, and programmes for computers, presentation of information, methods for treatment of the human or animal body by surgery or therapy, and diagnostic methods practised on the human or animal body.

Inventions are protected by a national or a validated European patent, which have a duration of 20 years and are subject to payment of annual fees. Inventions concerning three dimensional objects which are proposed as novel and industrially applicable and are capable of providing a solution to a technical problem may be protected by means of a utility model. Utility models have a maximum duration of three years and are renewed annually. Where the applicant is a Greek national, Patent Cooperation Treaty and European patent applications must be filed through the Greek Patent Office.

Particular rules and restrictions apply for inventions that are of interest to national security. National applications may be filed in English, French or German, but a Greek translation must be also submitted.

The patent owner is entitled to forbid third parties from exploiting the invention or importing the products protected by the patent without its prior consent.

Infringement actions can be brought before the competent courts by the patent owner and an exclusive licensee. Co-owners can bring infringement actions independently. In the case of an action based on a pending patent application, the court may postpone the trial until grant of the patent.

According to a rough estimation based on currently applicable official fees, the costs for obtaining a national patent in Greece, from application to grant, will approximately amount to €400 to €840, but applicants must expect extra costs where excess claim fees are to be paid (if the number of claims exceeds ten). Applicants must also take into account translation costs.

An unusual aspect of the system is that there is no substantial examination of national patent applications. Although a search is carried out by the examiners, the search report has only an informative character. Consequently, all patents are granted irrespective of the contents of the search report, provided that the grant fee is paid.

Trademark rights are primarily obtained through registration. Three types of registration are available in Greece: national, EU and international. Use of a sign in the course of trade may result in a non-registered sign, protected under the law of unfair competition. Trademark protection lasts for ten years as of the filing date and can be renewed indefinitely.

The owner of a trademark is entitled to prevent all third parties from using without its consent any sign which:

The trademark owner is also entitled to prevent:

The trademark owner may also seek protection through administrative proceedings, including the filing of oppositions or requests for revocation/cancellation or declaration of invalidity.

The official fees and disbursements for a smooth trademark registration process in one class are approximately €116, whereas for each additional class, up to ten classes, the official fee is €20. Additional attorneys’ fees are to be expected if the application is filed by a local attorney.

Trademarks are in general examined with respect to both absolute and relative grounds for refusal.

Difficulties foreign companies face in practice relate to capturing the intricacies of the business environment, the Greek public sector and bureaucracy. The most cited complaints against the national system are unduly long procedures. It is also criticised for offering capped damages that would not always cover the costs of applying the procedure.

Counterfeiting is a problem of significant importance in Greece. According to the results of a recent study carried out by the EU Intellectual Property Office (EUIPO) throughout the EU, it is estimated that due to the presence of counterfeit products in the Greek market, 13 sectors lose 12.3% of their sales on an annual basis. This percentage corresponds to approximately €1.4 billion, or €125 per Greek citizen, annually.

"The economic crisis has led to a decrease in seizures and destruction of counterfeit goods, due to a decline in enforcement activities of the public authorities."

The economic crisis has led to a decrease in seizures and destruction of counterfeit goods, due to a decline in enforcement activities of the public authorities (customs, economic police, economic task force, etc).

The pharmaceutical industry is particularly vulnerable to counterfeiting. Other sectors at threat, as confirmed by the aforementioned EUIPO study, are cosmetics and products for personal care, clothing and footwear, sports articles, toys, jewellery and watches, handbags and travel articles, recorded music, alcoholic beverages and wine, pesticides, smartphones, batteries and tyres.

In order to ensure the most effective protection of their rights, IP owners must adopt preventive strategies, including efficient monitoring systems. One of the most effective strategies is establishing a customs watch system by filing a general request with the Central Customs Directorate. Customs will notify the rights owner or its representatives when suspected infringing goods are intercepted.

Even where the rights in question are not entered in the register, customs can still stop suspicious goods ex officio.

Customs can also notify an authorised local representative of the rights owner about the suspected infringing goods under Law 4155/2013.

It must, however, be noted that only a small portion of counterfeit goods imported into Greece are seized by the customs. Consequently, rights owners should be vigilant in monitoring the internal market for counterfeit goods. In addition to the provisions of the aforementioned Law 4155/2013, which provides for a simplified procedure with respect to the seizure and destruction of counterfeit goods by a number of enforcement agencies such as the customs, the economic task force, the police and the coast guard, the rights owners may bring a case before the civil and, under relevant circumstances the criminal, courts.

Since counterfeiting occurs increasingly online and through social media, rights owners must also monitor those areas.

In the copyright sphere, Greece does not appear to have fully addressed piracy on the internet or adequately addressed end-user software piracy, in either the public or private sectors. Unlicensed sharing of copyright-protected software among multiple computers is the largest problem for the software industry, while unlicensed file-sharing of music and movies on the internet is a major problem.

Copyright protection is not subject to any formality (unlike patents, registered designs or trademarks); the work is protected automatically upon its creation and there is no official register for copyright.

There are several practices one can undertake to protect the author and to make sure there is an element of proof of the actual date of creation. The following are the most commonly used: the first is the deposit of the intellectual work to a notary. This practice provides a rebuttable presumption confirming the date of the creation of the work.

The second practice is the postage of a registered letter whose sender and recipient is the author itself (or the recipient can be a third person). On receiving the letter which contains the work, the author stores it in a safe place and keeps it sealed. In case a dispute about this specific work occurs the letter will be unsealed by a judge before the court who will confirm its content. Often, the postage of two registered letters is recommended.

The recent Law 4481/2017 also provides for a “time-stamping” service by the Hellenic Copyright Organization. However, this provision has yet to be enacted.

In cases of copyright infringement, both civil and criminal proceedings are available. It is worth noting that criminal prosecution takes place ex officio and potential sanctions are quite severe.

The new law provides that the procedure for lawful interception of communications set out by Law 2225/1994 will also apply to the detection of crimes committed at a felony level that infringe copyright and related rights protected by Law 2121/1993.

Another provision important for the protection of IP rights on the internet, despite the possible difficulties in its implementation, is the one which introduces a “notice and takedown procedure” regarding online copyright infringements.

Pursuant to a new law, which came into force in January 2018, as of October 17, 2018, there will be compulsory use of mediation in legal disputes that arise from patent, trademark and industrial design infringements. It remains to be seen how the new rules will be implemented and in which way this new practice will change the landscape in patent litigation.

Maria Athanassiadou, attorney-at-law, is a partner at Dr Helen G Papaconstantinou and Partners and heads the patent department. She has more than 20 years’ experience in a broad spectrum of IP matters, focusing on all aspects of patents, SPCs, utility models and industrial designs. She can be contacted at: m_athanasiadou@hplaw.biz

Fotini Kardiopoulis, attorney-at-law, is a partner at Dr Helen G Papaconstantinou and Partners and heads the anti-counterfeiting/anti-piracy department. She has dealt with a broad range of IP matters since 1998 with an emphasis on trademarks, plant breeders’ rights, civil
litigation and alternative dispute resolution. She can be contacted at: f_kardiopoulis@hplaw.biz