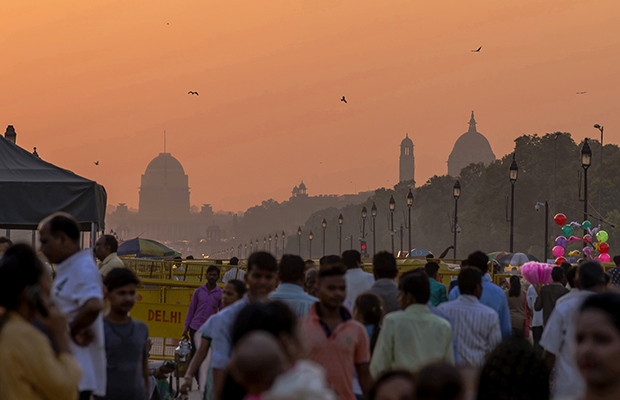 Intellectual property law in India has undergone drastic changes, especially in the context of ‘the public interest’, as Pravin Anand of Anand and Anand reports.

Just a few years ago, a large corporation with strong IP rights would be looked at with a certain degree of scepticism in India. Very often, defendants and the relevant court would both question the allegedly high prices of products or services protected by IP rights. It was a commonly held belief that if one were to permit the sale of cheaper products and services, then it would serve the interests of the public.

Similarly, an award for damages in favour of a plaintiff was perceived as being opposed to public interest, regardless of the blatant infringement carried out by the defendant.

In a nutshell, anything which could make its way to the pocket of the plaintiff was seen as being opposed to the interests of the public.

IP jurisprudence in India has increasingly steered towards public interest. The beauty lies in the fact that this has happened while giving primacy to the rights and interests of IP holders.

This change has been attained as a result of flexibility on the part of the Indian judiciary, including passing one-of-a-kind orders.

First and foremost, there developed a new jurisprudence of awarding flexible remedies in which courts started granting unusual orders to promote the wider public interest and make defendants pay for their wrongdoings.

In a suit regarding infringement of the trademark ‘Polo’ in relation to shirts, one defendant was ordered to perform community service at a designated old people’s home, while the other defendant was ordered to perform service at an orphanage. In order to ensure compliance with the order, the defendants were directed to provide a status report to the court once they had performed this service.

A similar order was also passed against a defendant who was found to be cyber-squatting and violating rights in the well-known trademark ‘Tata’, with the defendant ordered to perform community service at an eye-donation foundation.

In a case relating to infringement of the mark ‘Baba Zarda’ for chewing tobacco and related products the defendants were directed to install 150 spittoons at the Osmania Hospital in Hyderabad.

Since spittoons are much needed for chewing tobacco enthusiasts, and for the maintenance of cleanliness and community hygiene, this direction furthered public interest on multiple counts.

When eyewear company Ray-Ban initiated a lawsuit to restrain the sale of counterfeit Ray-Ban glasses, the Delhi High Court directed the defendants to donate 500 sunglasses to the Blind Relief Association.

The Delhi High Court ordered that the “germination standard” and quality of the defendants’ agricultural seeds be tested not in a laboratory, but in the premises of the court.

Seeds were directed to be sown in the flowerbeds of the High Court and the head-gardener was required to provide his report on their growth and health on the next date of hearing. Unfortunately, he could not provide a status report and alleged that the seeds were eaten by birds.

The Delhi High Court directed him to protect the seeds with an umbrella instead.

At a time when Microsoft was combating mass piracy all over the world and was investing tremendous resources in spreading awareness of software rights, the Delhi High Court enforced its IP in a stronger manner than any award of damages.

In a civil suit against a defendant who was commercialising unlicensed software, the court directed the defendant to cooperate with Microsoft, participate in seminars and spread awareness against piracy and advocate the lawful use of software.

Expanding the horizons of contempt jurisdiction

With established jurisprudence on passing unique orders aimed at benefiting the public, during the next phase of IP jurisprudence in India there was a gradual shift towards passing orders which were proportionate to the extent of wrongdoing by defendants.

In order to combat the misconception that defendants could get away easily in IP infringement disputes, the courts increasingly started to invoke their contempt jurisdiction.

"Such orders being passed by the High Court of Delhi are highly appreciated by the general public."

Over a period of a few years, the contempt jurisdiction of the court has led to extremely strong deterrence measures being enforced by the court. For good measure, such deterrence has involved not only penal remedies, but rather creative ones as well.

Angered by the audacity of the defendant and the wanton nature of his dealings, the court found the defendant guilty of contempt and had no hesitation in sentencing him to imprisonment for 30 days.

Similarly, in another case, a company was found making consistently false statements about being unaware of the brand Bridgestone. When the records of the customs authorities showcased that the defendant’s company was exporting products under the same brand to Nepal, the Delhi High Court came down heavily on the defendant and ordered the immediate arrest of the managing director of the defendant company. Additionally, the court ordered the defendants to compensate the plaintiff with costs of INR 36 lakh.

Any defendant who lived with the idea that being evasive and clever enough to avoid making any admissions of wrongdoing was beyond the reach of the law was in for a rude shock.

In a case relating to Whatman Filter Papers, the court found something dubious in the statements made by various directors of a defendant company. The court invoked its inherent powers to pose any question and order production of all material documents under section 165 of the Indian Evidence Act, 1872 and called the defendants’ bluff.

The court immediately invoked its contempt jurisdiction and ordered for payment of punitive costs to the tune of INR 1.8 crores.

These orders grew in number as judges started to adopt a stronger approach. It was clear that the focus of the debate was no longer on questioning the bona fides of the rights holder. Instead, it had shifted to questioning the motivations of the defendant.

As a result, IP jurisprudence has changed rapidly and has been involved in increasingly rare orders to increase deterrence for IP infringement.

Damages to the All India Institute of Medical Sciences

In a patent infringement dispute which worked its way to the Supreme Court of India, the actions of the defendants were fraught with bad faith. Punishing the defendants for their actions, the High Court ordered that the defendants make payment of INR 20 lakh in favor of the All India Institute of Medical Sciences, which will be thereafter used for cancer research.

One of the most unusual orders came in a contempt petition in a suit concerning Merck & Co’s lawsuit claiming infringement of its drug sitagliptin. The defendant’s wrongful actions led to the court invoking its contempt jurisdiction and passing an order which required the defendant to plant 140,000 trees on the New Delhi Ridge.

The ingenuity of the court’s direction did not end here, as the defendant was further directed to protect the trees that it planted until the rainy season, and to monitor their condition and growth through surveillance by aerial drones keeping in mind the security of the cantonment area.

Given the fact that New Delhi’s air pollution levels have been at an all-time-high, the court ordered the plantation of 16 varieties of trees which are known for curtailing pollution levels.

From trees to towels

Continuing with the trend of directing infringers to serve the general public, and in those areas where society needs intervention the most, the Delhi High Court followed up on its “green order” and directed the defendants in another case to provide wholesome meals to children and provide a continuous supply of sanitary napkins in ten orphanages and ten foster care homes in Delhi for a period of two years.

At a time when India is witnessing another chapter in the collective awakening of the nation’s social consciousness, aided by popular media such as film, news, social campaigns, etc, such orders being passed by the High Court of Delhi are highly appreciated by the general public.

Is the level of deterrence advocated by the Delhi High Court sufficient? It is said that the Germans in World War 2 thought that dropping bombs on the UK would create fear and scare the British, but they were surprised to find that this didn’t happen. Society was divided into those who were directly hit by bombs, in whom resistance and fear were created, and those who escaped and felt themselves immune from harm and went on quite normally with their lives. 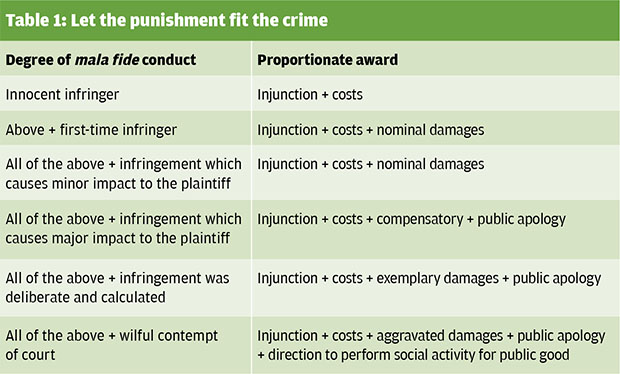 Similarly in the IP community, those who have been stopped and made to pay damages do feel the deterrence but not those who escape—they begin to feel vaccinated, immune or simply protected by divine luck.

Obviously, the degree of deterrence required to reach out to the second category is far higher if IP crime is to diminish.

In other words, the degree of misconduct determines the degree of punishment that a court can award against a defendant, with a view to creating deterrence against similar acts by third party entities in future (Table 1).

Pravin Anand is managing partner of Anand and Anand. He can be contacted at: pravin@anandandanand.com