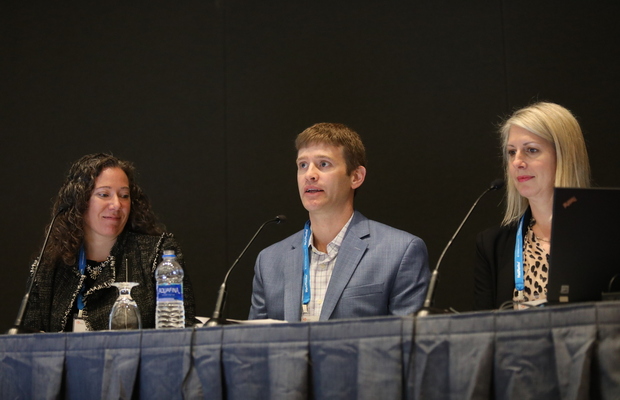 New technology is enabling consumers to experience the world around them differently, with implications for brands and intellectual property professionals. Sarah Morgan reports

From the film Blade Runner that highlights a future where advertising is built into the landscape, to the book Buy Jupiter and Other Stories, in which aliens purchase the planet Jupiter for use as a giant billboard, the sci-fi genre has imagined a multitude of scenarios for advertising and branding.

We’re still some time away from seeing these extreme forms of advertising become a reality. But augmented reality (AR) and virtual reality (VR) technologies are surging forward and taking branding along for the ride. The future is now.

Speaking yesterday during CT02 Reality Check: Adapting Brand Strategies for AR and VR, Matt Stratton, Associate General Counsel, IP at Snap Inc. (USA), explained that AR, where digital elements are blended into the real world, is well-used already across its Snapchat platform and others.

“AR is a new form of user-generated content. It’s another way of visual communication; we‘re progressing from texts, photos, and videos to [using] AR within photos and videos,” he said.

Four years ago, Snapchat launched AR lenses, which apply AR to your face (think filters with bunny ears and multi-colored hair) and world lenses, which project out into your field of view (think of a mini-cartoon version of yourself dancing across a table). Snapchat also offers Lens Studio, a free software that allows anybody to create AR lenses.

He showed session attendees how a poster for the film The Lion King could be transformed into an AR experience. “A Snapchat lens can teach it to recognize the poster and allow for a 3D experience,” he explained.

“Brands can make branded user-generated content that ideally has a viral nature to it and will get the word out,” said Mr. Stratton.
AR technology also allows users to create lenses that interact with public spaces. For example, Snap has created a model of the Eiffel Tower, allowing users to interact with its structure.

This is where the technology runs into difficulties, inviting questions about brands and their relationships with public and private spaces, and who controls the digital space around the structures viewed through an AR lens.

While AR presents an opportunity to target consumers with individualized ads, Deborah Davis, Senior Advertising Counsel at Electronic Arts Inc. (USA), warned that targeting consumers too specifically may cause problems.

“If you over-target, you lose the opportunity to create a national conversation around your brand and do something unique,” she said.

She pointed out that brands should keep in mind the concept of accessibility when considering whether to use AR.

“Many consumers can’t see well or hear well. There’s a whole community of consumers that may be underserved by a brand [that hyper-targets consumers],” she said.

VR, which creates simulated environments, is a totally different tool. Ms. Davis noted that to use this technology effectively, brands need to “invest in building an entire consumer experience,” which takes a lot of computing power, time, and development costs.

“You may not be able to do as much targeted marketing [as you could with AR],” she said. ”It’s going to need to be a little more uniform.”

The technology can be used as a way to extend your product line, she said, citing The Walt Disney Company’s work with entertainment company The VOID to create VR experiences, where participants walk through a Star Wars-themed environment (while, in reality, they’re walking through a series of empty rooms).

Looking to the future, Kimberly Culp, Director at Carr McClellan (USA), explained that VR activities could lead to litigation over sensory experiences in this space.

Trademarks are being granted for sensory experiences, such as a particular scent. If a trademarked scent were to become associated with the smell of a virtual experience, and another brand then used the same scent in a different VR experience, it could lead to litigation, she said.

Litigation is also likely to arrive in the AR context, panelists said, especially in the context of so-called “conquest ads”, where brands deploy their own advertising over or next to their competitor’s advertising.

Mr. Stratton said: “As consumers become more accustomed to depending on AR as a source of information, there are more opportunities to disrupt that process.”

For example, an app could direct you to “replace” one brand’s ad on the street with a rival brand’s ad in the AR space to win a prize or discount.

“Is there a claim? In my view, it depends on how consumers are doing this. Is it genuinely confusing anybody? I don’t think anybody really is, but on brand tarnishment maybe there’s a claim,” he said.

Despite the complexity of the issues, Mr. Stratton is optimistic that a traditional trademark analysis for infringement and dilution will be used when such issues arise in the AR and VR context—as they inevitably will, he said.