The newly-appointed deputy director of the United States Patent and Trademark Office (USPTO) has outlined her vision for the future and highlighted clamping down on “abusive” patent litigation as a key aim.

Michelle Lee (pictured), who was appointed in December last year, officially took up her post this month.

Writing in her first blog post, which is published on the USPTO website, Lee said she aims to retain the US’s “global competitiveness” in a rapidly evolving marketplace.

Lee said the USPTO will engage with stakeholders and members of Congress from both political parties to improve the US patent and patent litigation systems.

The US government has made increased efforts to tackle the problem of non-practising entities (NPEs) filing abusive lawsuits.

The Innovation Act, a bill designed to clamp down on NPEs, sometimes referred to as “patent trolls”, was passed by the House of Representatives in November. 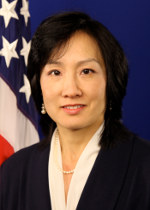 In the blog post, Lee added that she was eager to work with Penny Pritzker, US commerce secretary, to foster an economy that is “better at inventing and commercialising” products and technologies.

“My team and I will continue to work with all our stakeholders and user communities to assess new challenges and identify new opportunities to build an agile system of IP protections that catalyses innovation, incentivises commercial research and development,” Lee wrote.

Michael Oblon, partner at Perkins Coie LLP in Washington, DC, said the remarks on patent litigation were interesting because the USPTO was “not authorised” to engage in patent infringement proceedings.

“While it is unlikely that the USPTO could (or should) begin considering patent infringement, it certainly can affect and already has affected patent litigation in other ways," said Oblon.

Oblon added: “The USPTO already has made sweeping changes in the way that it re-examines already-issued patents. As the USPTO continues to streamline and improve its post-grant review proceedings, the nature of district court patent litigation will change as well.”

Lee, who was born and raised in Silicon Valley, was formerly a partner at the California-based law firm Fenwick & West LLP.

Before joining the USPTO, Lee served as deputy general counsel for Google and was the company’s head of patents and patent strategy.

Over the last few years Lee has worked at the office on the patent public advisory committee and as the first director of the Silicon Valley office of the USPTO.

“Over the last five years, working in concert with Congress and the Obama administration, the USPTO has built a firmer foundation to support a more effective IP system,” Lee wrote.

Lee added: “It is indeed an honour to be able to continue on this path at the USPTO in my new role as deputy director of the agency. I am committed to working together with all our stakeholders to advance our shared goal of fuelling the unique American ingenuity that fuels our nation’s job growth and economy.”