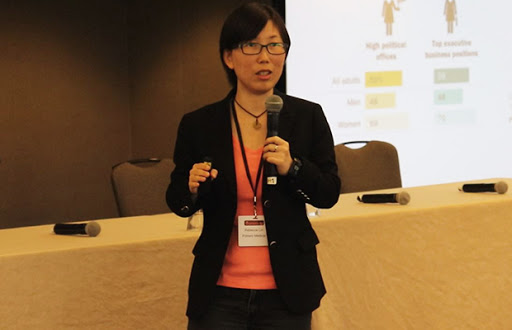 Disproving myths surrounding gender was the theme of a keynote speech delivered by Rebecca Lin, vice president of strategy and global business development at Potrero Medical.

Lin was speaking at WIPR’s Influential Women in IP event in San Francisco on Tuesday, October 15, where she focused her session on “Women in Leadership”.

“Growing up as a girl, I always heard that boys are better at maths. Maths is such a symbolic subject that’s directly linked to being smart,” said Lin.

While SAT scores in the US do depict a gender difference—boys average slightly higher than girls—Lin explained that in countries with a lower gender gap (as measured by the World Economic Forum), the score difference is smaller too. In Iceland, the country with the lowest gender gap, girls are outperforming boys in maths.

“The gender gap correlates with the maths score difference” she added.

Lin then turned to infidelity, pointing to data that showed that as people become more occupationally powerful, they are more likely to engage in infidelity.

“If you look at the power level of different groups, when you have more power, infidelity grows. Between a man and woman, who usually has more power?” she said.

Leadership and the ‘double bind’

“Women make up half of the employees in most companies. But at the S&P 500 companies, every level you step up there are less and less women,” said Lin. Only 5.4% of CEOs at S&P 500 companies are women.

However, there have been incremental improvements; three years ago, 24 women were CEOs in S&P 500 companies, this year it’s grown to 33.

According to a 2019 study from human resources company Zenger Folkman, women outscored men on 17 of the 19 capabilities that differentiate excellent leaders from average or poor ones. This included capabilities such as taking initiative, developing others, and building relationships.

“I think there’s a problem here,” said Lin, citing a Pew Research Centre questionnaire that asked people whether they thought there were too few women in high political offices or top executive business positions. Less than 50% of men agreed, while approximately 70% of women agreed.

She added: “Most of my male counterparts told me I don’t work like a woman. I thought it was a good thing before I had awareness about gender equality, but now I think it’s very bad.”

Unfortunately, even when women are in leadership positions, this doesn’t mean that they’re being paid the same as their male counterparts.

“It’s the ‘double bind’. We get punished by not asking, as we earn less. We get punished by asking for more. We’ve grown up in a society where the perspective about women is that we’re nice, cooperative, warm, uncompetitive and not aggressive,” warned Lin.

She advised women to increase their salary expectations by at least 30% when they are asked in an interview or are negotiating.

“Many women are not good at negotiating for themselves but they are good with negotiations for others, like their family. There are lots of skills you can use to negotiate a better position, better pay, and a better career, but it’s not easy,” said Lin.

She concluded: “Knowing all the statistics, I would encourage women, especially young women, professionals to feel more confident. Trust yourself, you’re good.”