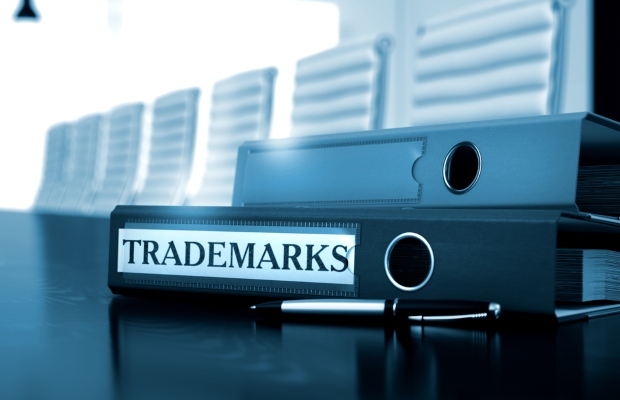 This is a good number considering the challenging year due to the COVID-19 pandemic and its effects on the economy as well as international sanctions still in place against Russia. Figure 1 demonstrates the increasing trend of new trademark filings for the last three years.

The total numbers for 2020 consist of the following: 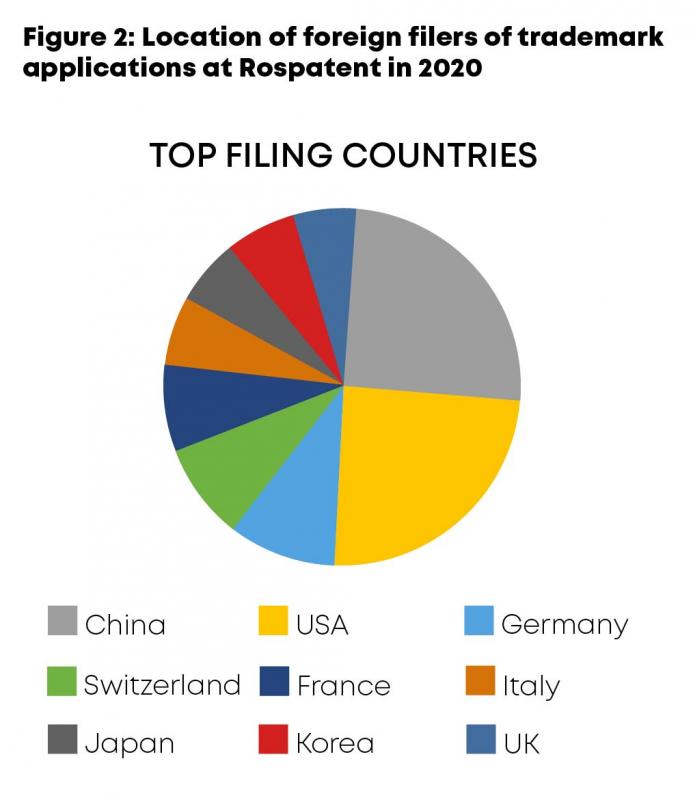 The top foreign filers were again from China and thereafter the US, Germany, Switzerland, France, Italy, Japan, Korea and the UK (Figure 2).

“Any designations can be registered—verbal, pictural, combined, three-dimensional, olfactory, etc—but their ability to be registered depends on their distinctiveness." - Riikka Palmos

The above numbers demonstrate that national filings are still a more popular way to protect trademarks in Russia. The reason for companies to file more national trademark applications is twofold: Russian applicants file national applications because trademarks are mostly used and protected in Russian Cyrillic characters which are used in Russia.

In addition, foreign companies file national applications to cover the Cyrillic version of their trademarks in Russia because protecting a trademark in Cyrillic as an international trademark in Russia is not reasonable, as there are different Cyrillic characters used in different Commonwealth of Independent States (CIS) countries.

Keep in mind the formalities

Full examination of trademark applications currently takes between six to eight months. Multi-class trademarks are allowed, and Russia’s patent office, Rospatent, strictly follows the Nice Classification. A power of attorney is always needed, and applications must be filed in the Russian language.

Any designations can be registered—verbal, pictural, combined, three-dimensional, olfactory, etc— but their ability to be registered depends on their distinctiveness.

Expedited examination is possible, but the patent office requires that first a trademark search in all classes should made at the cost of the applicant. This can be costly, but the process is usually complete within a couple of months.

Refusals end up at the IP court

Sometimes the Russian patent office, Rospatent, refuses a trademark application. The examiner’s refusal can be first appealed to the Patent Disputes Chamber (PDC) of Rospatent. The decision of the PDC can be further appealed to the IP Court.

Figure 3 shows that the court tends to follow Rospatent’s decisions. This demonstrates that appeals filed with the IP Court must be well prepared and grounded to be successful. 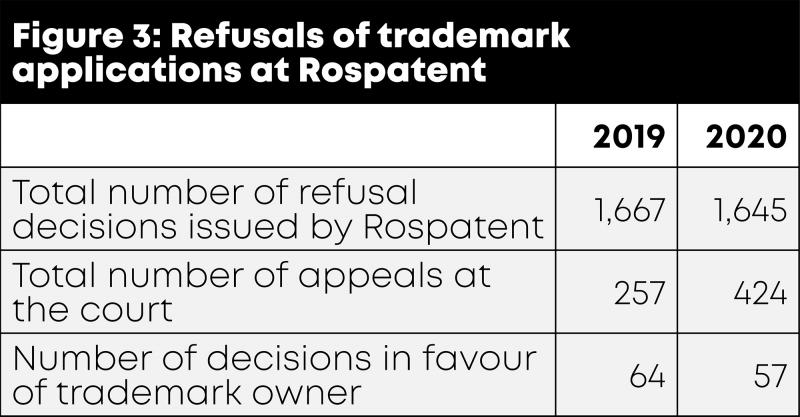 Russia has a long opposition period, with challenges allowed for a full five years after registration. It is important for companies to keep good documentation about the trademarks, as Russia has strict requirements for proving use in the face of possible cancellation actions. Licence agreements with third parties must be recorded in order to be valid.

Russia is constantly developing its IP laws and practices. The patent office now allows electronic filings and has started to issue certificates only in electronic form. Less formal requirements and process are an important improvement for business continuity especially during the COVID-19 pandemic, while the patent office has been partly closed and examiners working from home.

Russia will soon introduce the Eurasian trademark system, covering Russia, Armenia, Belarus, Kazakhstan and Kyrgyzstan. It is similar to the Madrid System for international trademarks, which means that one application or registration provides protection in five countries.

Riikka Palmos is senior partner at Papula-Nevinpat. She can be contacted at: riikka.palmos@papula-nevinpat.com