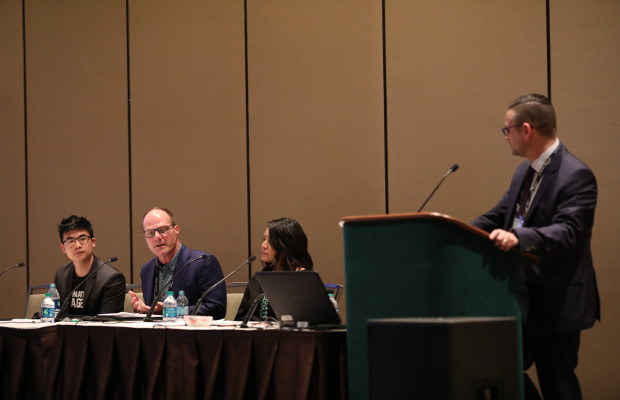 The 2017 decision in Matal v. Tam captured the attention of the trademark community and had serious implications for another decades-long trademark case concerning disparagement. Sarah Morgan reports.

A rock star and a social activist captivated the attention of registrants yesterday with their stories during CM02 THE REDSKINS and THE SLANTS: A Review of the Causes, the Cases, and How the First Amendment Is Likely to Impact Trademark Registrations Going Forward.

In June 2017, the Supreme Court of the United States held that the U.S. government’s ban on disparaging trademarks was unconstitutional, in a move that overturned more than 70 years of legal practice.

The man who sparked this decision was Simon Tam, founding member of Asian-American rock band The Slants. His journey began with a film in 2004—Kill Bill, directed by Quentin Tarantino.

“It was the first time that I had even seen an American-produced film that showed Asians as cool, confident and sexy,” he explained in yesterday’s session. Mr. Tam set about launching a rock band to “sing about our perspective … while reappropriating this slur.”

In 2009, a friend recommended that Mr. Tam file an application to register a trademark, claiming that it would “cost a few hundred bucks and only take six months.”

This was not how thing transpired. His application was rejected on the grounds that it was disparaging to persons of Asian descent.

Mr. Tam explained that the rejection from the United States Patent and Trademark Office (USPTO) quoted UrbanDictionary.com and included photos of Miley Cyrus “pulling her eyes back in a slant gesture” as evidence that THE SLANTS was disparaging.

“We thought we could appeal using traditional methods,” such as surveys, legal declarations, and expert reports,” said Mr. Tam, but these did not work.

Mr. Tam changed tactic, submitting an ethnic neutral application. In the first application, Mr. Tam had submitted band posters which featured Asian themes; his second application did not indicate the band’s Asian descent at all. But his application was again rejected, using the same evidence that had previously been cited.

The case ended up at the U.S. Supreme Court. Mr. Tam said that “if the government truly cared about marginalized communities … then why didn’t they begin by canceling trademark registrations for the Ku Klux Klan or other hate groups?”

The case centered on Title 15 United States Code, Section 1052 (Section 2(a) of the Lanham Act), under which trademarks that are likely to disparage people, institutions, or beliefs are barred from registration.

Moderating the session's panel, he noted procedural shortcomings in the rejection of the second application: “Each application must be evaluated separately, but that’s not what happened here.”

Mr. MacMull added: “This should never have become a constitutional case. There was certainly enough evidence for the United States Court of Appeal for the Federal Circuit (Federal Circuit) to reverse because there wasn’t substantial evidence in support of the U.S. Trademark Trial and Appeal Board’s (TTAB’S) decision.”

Following the Supreme Court’s decision, in December 2017,  the Federal Circuit ruled that the Lanham Act’s ban on “scandalous and immoral” trademarks was unconstitutional in In Re: Erik Brunetti, overturning the TTAB’s decision to refuse a trademark registration for the word “Fuct.”

Stephen Baird, Chair of Winthrop & Weinstine, P.A.’s Trademark and Brand Management Group (USA), suggested that these cases mean the ban on scandalous, immoral, and disparaging trademarks is “gone, at least for the time being.”

The movement to end Native American mascots for sports teams in the United States and Canada has existed for more than four decades.

The first significant case that dealt with it was initiated by Native American Suzan Harjo, who was influential in starting the movement in the 1960s. She successfully overturned a trademark registration for National Football League team The Washington Redskins at the USPTO in 1999, but that decision was overturned at the district court level and then appeals were rejected under the doctrine of laches.

Years later, Amanda Blackhorse, a social worker and activist (USA), who spoke on yesterday’s panel, took on the WASHINGTON REDSKINS trademark. This lawsuit, Blackhorse v. Pro Football, Inc., was filed by younger plaintiffs and therefore not barred by laches. She won the case at the TTAB in 2014.

Pro Football appealed the decision in August 2014 but lost, with the court upholding the TTAB’s decision.

Again, Pro Football appealed, this time to the United States Court of Appeals for the Fourth Circuit, but the case was vacated because of Matal v. Tam,” Ms. Blackhorse said in yesterday’s session.

She went on to explain that the use of such mascots is important to Native Americans because there are more than 560 recognized Native tribes in the United States alone, with more in Canada and Mexico, and these mascots are the only image of them that the public have in many cases.