The system of opposing the grant of a patent, which allows any person to file an opposition within six months from the date of publication in the Patent & Utility Model Gazette, has been in force since April 1, 2015. As of October 21, 2015, the number of oppositions filed has reached 119.

The system of opposing a granted patent aims to give a third party the chance to seek an opportunity to file a request with the Japan Patent Office (JPO) to review the appropriateness of the patent.

If an opposition is filed, the JPO examines the appropriateness of the patent and if it finds any deficiency in the patent, it revokes the grant. If the decision of revocation becomes final and binding, the patent is deemed never to have existed from the beginning.

The examination of the opposition is conducted by a documentary examination. In an opposition examination, even grounds that were not initially pleaded by the opponent may be examined, and therefore evidence found by the search conducted ex officio may be used to supplement the evidence that supports the reasons for revocation, including lack of inventiveness or evidence that establishes that the patent has not satisfied the requirements for description and claims.

"If the decision of revocation becomes final and binding, the patent is deemed never to have existed from the beginning."

Although examination of a witness and/or examination of evidence may be conducted, oral examination is not conducted as is done in a trial for patent invalidation, by which the burden borne by the opponent is alleviated. Because the system is designed to facilitate filing of opposition by a wide range of parties, it is expected that the opposition system will be more widely used by various parties.

Our firm has been observing the Gazettes that include patents issued to our clients’ competitors and we have considered the possibility of filing an opposition.

Often we receive enquiries about the differences between the system of opposing a granted patent and the system for invalidating a patent during a trial.

Table 1 shows a comparison between the two systems. 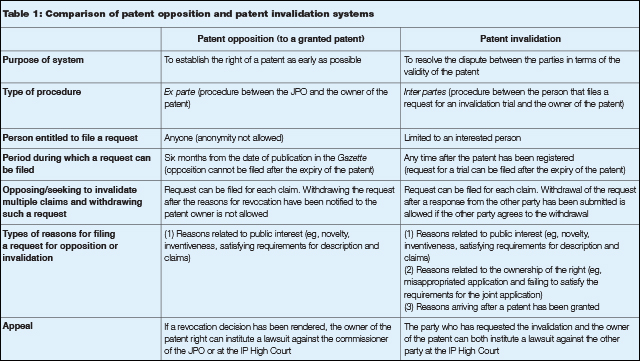