The fight for trans rights 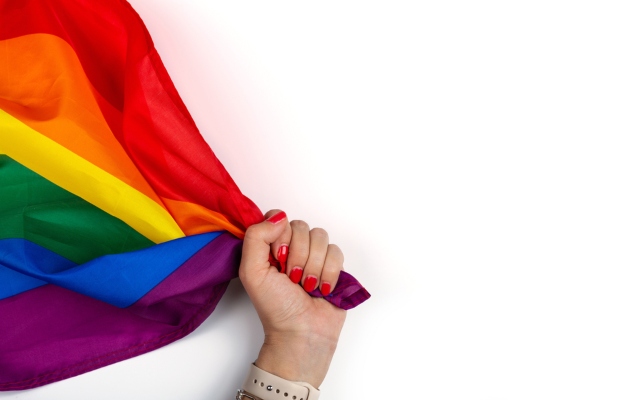 While the rights of lesbian, gay and bisexual people have advanced over the past decades, campaigners for transgender people believe that the ‘T’ in LGBT+, needs far more attention. Muireann Bolger reports.

DJ Healey, senior principal at Fish & Richardson in Texas, was four years old when she realised that she was trapped in the wrong body.

“I remember asking my Mom when I was going to turn into a girl, and she just looked at me and told me that this wasn’t going to happen. I thought that it made no sense—I was really confused that I was a boy,” she recalls.

Healey is a member of a small but growing minority who identify as transgender, meaning they do not identify with the sex they were assigned at birth.

While no robust survey data on the number of transgender people worldwide exist, a 2017 survey by the Gay and Lesbian Alliance Against Defamation (GLAAD) suggests that Millennials (people born between 1980 and 1996) are 12% more likely to openly identify as trans—double the number of transgender and gender non-conforming people self-identified by Generation X (people born between 1960 and 1979).

Views on gender norms are changing. According to a 2018 report by Ipsos Mori, nearly one-third of Millennials and three quarters of Generation Z (people born from 1997 onwards) accept a spectrum of gender identities and reject the concept of a man/woman/binary.

Despite this growing awareness of gender fluidity, Healey’s own journey towards assuming her desired identity reflects the struggles faced by many transgender people. Her story is fraught with discrimination, prejudice and professional setbacks.

As she attended law school, got married and developed a successful career as a male IP attorney known as “David”, Healey continued to grapple with inhabiting a gender identity that felt misaligned with her true self.

“I kept it secret and tried hard to make it go away, I went to a psychiatrist and to doctors, I took medication and had therapy,” she says.

But nothing worked, and Healey dealt with the malaise by throwing herself into her work. “Alcoholism helps you drown in a way, and so does workaholism. It covers up your feelings and helps hide or bury things that are bothering you,” she explains.

In 2004, an epiphany came in the form of a Los Angeles-based psychiatrist who told her that she had gender dysphoria—the distress a person feels due to a mismatch between their gender identity and their sex assigned at birth.

“He told me I had done everything in my power to fight this and that I just had to accept who I really was,” recalls Healey.

From that point, she began living a double life, gaining a profound respite when she was able to embrace a female persona. “I felt wonderful; the illness and depression that used to come over me was gone,” explains Healey.

In 2017 she decided to come out as a trans woman to peers and clients. For Healey, her ordeal had become a life or death situation.

“It came down to a decision that a lot of trans people face: you either come out or it is the bottle, the needle, or the bullet,” she says. “My wife had a hard time with it but she weathered the storm. She knew that I could either live as Danielle or I would be dead. It had got to the point where I could no longer live as a man.”

”It came down to a decision that a lot of trans people face: you either come out or it is the bottle, the needle, or the bullet.” - DJ Healey, Fish & Richardson

Healey argues that despite the support of her law firm, her transition led to markedly negative consequences for her career.

“I realised that for every person who was supportive, ten people were repelled,” she explains.

This, she adds, occurred despite her successful career in IP. “I’m a lawyer who has been invited to the University of Texas School of Law and Stanford Law School to speak on patent issues. I’m well known in my field,” says Healey.

She believes that the issues of professional acceptance stem from a lack of familiarity with the transgender community.

A big part of the problem is that there are very few transgender, non-binary or gender-fluid people working in the legal sector, and even fewer who are prominently visible, agrees Darren Smyth, partner at EIP in London and a member of LGBT advocacy group, IP Out.

According to a 2020 diversity report by the National Association for Law Placement, the overall percentage of US LGBT+ lawyers had increased by approximately one-third of a percentage point from 2019, rising to 3.31%. But the association does not provide a breakdown for transgender lawyers.

A report by the UK Law Society, the Diversity Profile of the Solicitors’ Profession 2019, showed that 2% of solicitors and 1% of partners confirmed that their gender identity was different from that assigned to them at birth. 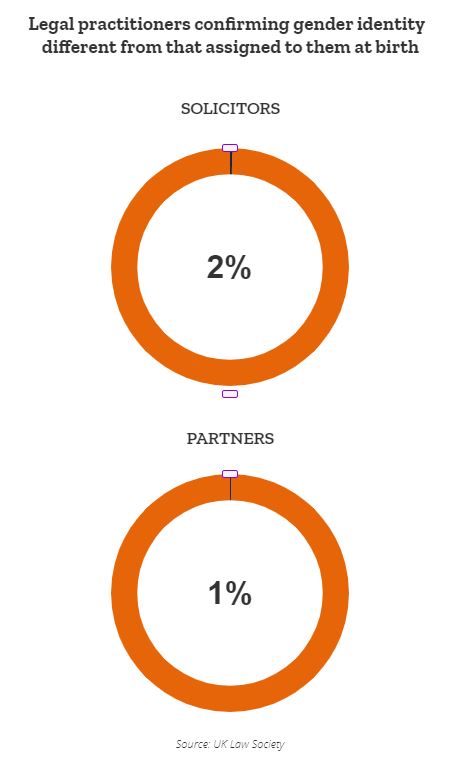 Notes Smyth: “There is a lack of visible representation and a scarcity of role models. This may be due to a perception from the past that the profession is not welcoming.”

Charlotte Suttle, senior workplace programmes manager at Stonewall, believes this issue needs to be addressed. “From our work with legal firms, we know trans and gender-diverse legal professionals are under-represented throughout the sector, particularly in senior roles,” says Suttle.

“This is unacceptable and highlights the challenges that many trans, non-binary and gender-fluid legal professionals face.”

A rise in transphobia

Campaigners believe that the challenges faced by the trans community have been further compounded by a stark rise in transphobia in recent years. Research by Totaljobs showed that in 2016, around half (52%) of trans people didn’t reveal their gender identity at work; in 2021, the number had surged to 65%.

Stonewall reported that a third of transgender people across all employment sectors have been the target of negative comments or conduct from colleagues, while one in eight (12%) have been physically attacked at work.

According to campaigners, this transphobia has been driven partly by the rise of the gender critical movement, which holds that trans women are not women due the innate biological differences, and demands the exclusion of trans women from women’s spaces and organisations.

”I transitioned 20 years ago and I couldn’t get a job as a trans woman in the 1990s, but I felt safer then than I do now.” - Rachel Reese, Global Butterflies

“In society, there seems to be a movement to roll back trans rights. The rhetoric of the campaigning often mirrors the anti-gay prejudice of the 1980s and 1990s, and seeks to suggest a conflict between trans rights on the one hand and LGB rights and women’s rights on the other,” contends Smyth.

Healey notes that her decision to transition coincided with a particularly fraught period for LGBT+ rights in her state.

“I picked the absolute worst time to transition, because the Texan governor had called a session for a special legislature to consider the ‘bathroom bill’ to keep trans women out of women’s bathrooms,” she recalls.

Following the accession of Donald Trump to the US presidency, there was a spate of these so-called bathroom bills across eight US states—all aiming to force transgender people to use bathrooms that matched the gender on their birth certificate.

Two days following her gender reassignment surgery, Healey attended court to testify against the bill and became part of a successful effort to block it. But she is far from complacent, predicting that the state will see the resurgence of such bills in the future.

“There is a legislature in Texas twice a year, and it is a frightening time for LGBT+ people. There have been a couple of very serious anti-trans bills—and most likely, there will be more,” she says.

Rachel Reese, founder of Global Butterflies, an organisation that educates organisations, including law firms, on how to be more trans-inclusive, concurs with Healey that now is a “scary time” to be part of the transgender community.

“We are under a lot of stress, the rise in transphobia since 2017 has been unbelievable. I transitioned 20 years ago and I couldn’t get a job as a trans woman in the 1990s, but I felt safer then than I do now,” she says.

Reese argues that while the legal sector had been leading the way on trans rights, it has since “slowed down”—possibly in response to the pressures and challenges posed by the COVID-19 pandemic.

“Some law firms are moving forward, some are pausing,” she notes, adding that now is not the time for a hiatus when it comes to diversity and inclusion (D&I). According to Reese, a diverse and trans-inclusive workforce is good for business—clients are changing and so should firms.

Millennials and Gen-Zers are discerning and want firms that reflect the diversity of their emerging client base, she warns. “The law firms that do that well will thrive; the ones that don’t will wither. I think law firms are leading—they are the pioneers—but they must not lose confidence in the progress they have made. It’s the right thing to do, and history will judge them well.”

”There is a lack of visible representation and a scarcity of role models. This may be due to a perception from the past that the profession is not welcoming.” - Darren Smyth, IP Out

LGBT+ campaigners believe that to become more trans-inclusive, firms need to take action. One of the most important steps is de-gendering language by swapping “he” and “she” for neutral pronouns, using ungendered job titles, and paying attention to the language used in job adverts, job descriptions, employment contracts and application forms.

These approaches, says Reese, recognise gender as a spectrum.

“If I see a recruiter in a law firm who has their pronouns in their signature box, it shows that they have done some work on trans inclusiveness. It shows they don’t assume someone’s identity by looking at them; it’s inclusive and welcoming. By being silent we don’t know what people think.”

The challenge for the profession which has such low levels of trans inclusion is to ensure that transgender, non-binary and gender-fluid people are welcome in the sector, and to communicate that effectively to those thinking of joining, says Smyth.

“It falls to the profession as a whole to prepare the path. People need to understand basic concepts around gender identity without its being the job of trans or non-binary people to educate them,” he argues.

“Change requires firms to create safe spaces, such as network groups for trans, non-binary and gender-fluid employees, to discuss problems and escalate them to senior leaders.

“Networks can help reassure staff that there are others who share some of the difficulties they are facing, and empower them to raise concerns,” says Suttle.

Despite all the challenges she has faced, Healey is hopeful that change will come, pointing to the progress made in the US over the past year and President Joe Biden’s vocal support for LGBT+ rights.

The Supreme Court’s decision in Bostock v Clayton County (2020) made it illegal to openly discriminate against someone based on sex, and the US Congress passed the Equality Act in February, a bill that—if passed by the Senate—will prohibit discrimination on the basis of sexual orientation and gender identity.

Looking to the future, Healey strikes a cautiously optimistic note. “I hope our community can get more acceptance, and this comes from familiarity and also inclusion—which comes from integration. Trans people are in a really odd situation because we are such a small minority,” she says.

“As today’s young people become the decision-makers of tomorrow, you will see a lot more D&I. That will benefit the trans generations of the future, who I hope will not have to go through the same experiences that I did.”