Influential Women in IP: juggling childcare and planning for curveballs 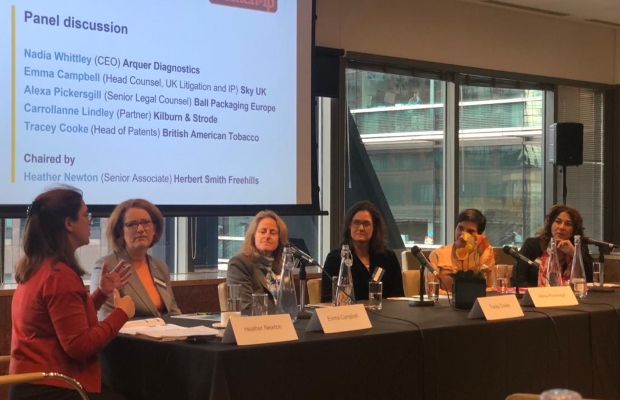 As dual-income households rise, requests from men for flexible working arrangements to fit in with childcare responsibilities are reportedly becoming more frequent. But company cultures need to change to ensure that these requests are more broadly accepted, according to a panel.

Yesterday, November 7, at World IP Review’s Influential Women in IP in association with Herbert Smith Freehills, a panel session focused on “Harnessing the power of diversity in IP”.

On requests for flexible childcare arrangements, Alexa Pickersgill, senior legal counsel at Ball Packaging Europe, said: “It can be very much line manager dependent so maybe you were just lucky with the boss you had. But it shouldn’t be down to pure luck, it should be more broadly accepted.”

In agreement was Nadia Whittley, CEO of Arquer Diagnostics, who said that company culture needs to be so “deeply rooted that it has to transcend your line manager”.

Without buy-in from the top, there will be no trickle down throughout the organisation and “if change is down to a line manager, it means it’s not company culture”, she warned.

It works both ways—company culture needs to allow men to take the same childcare responsibilities and same time out as women, said Emma Campbell, head counsel of UK litigation and IP at Sky UK.

She added: “The thrust at Sky is enabling men to take on responsibility at home, in order to make it fairer for women at work.”

Tracey Cooke, head of patents at British American Tobacco, shared her own career story. When she started in the legal profession, her daughter was 14 months old.

“I was faced with a problem: how do I balance a new role and a young family? I wasn’t going to compromise family life for my job,” Cooke said, adding that she subsequently asked her manager if it was possible to cut her working week to four days and was delighted when the request was granted.

“I did that for a year, and my fantastic husband shouldered a lot of the burden. Then I was faced with the next challenge … when my children went to school,” she said. Both Cooke and her husband requested that they worked on a term-time agreement, taking blocks of holiday throughout the year when their children were off school.

Both requests were granted—her husband was the first man in his company to request such an arrangement.

Planning has played an important role in Whittley’s successful career. Whittley advises the two women she mentors to plan for curveballs in their careers and life, such as new caring responsibilities or an illness.

Carollanne Lindley, partner at Kilburn & Strode, added that many of her female colleagues put the most pressure on themselves, always expecting 115%. To ensure they are prepared when ‘curveballs’ are thrown by their life or career, Lindley recommended women practice mental resilience.

“It’s also important to have your own support system. A lot of this will come from your own gender, but there are also many male colleagues who feel the same way. They see the value for the company in having the best and brightest continue working in the organisation,” she said.

However, while support systems are vital, there can also be difficulties, particularly for the senior-level women involved.

Whittley cited a 2016 study in The Academy of Management Journal, which found that senior-level women who champion younger women are more likely to get negative performance reviews.

This also plays into how leadership attributes have traditionally been viewed—Lindley explained that, according to a survey, 30% of people saw female leadership as caregivers, rather than as decision-makers.

“When we can turn that into a positive; the perception and conversation changes,” she said. “[Women] have great attention to being able to make the business work—you care about the details, initiatives, and individuals. Policies aren’t enough, the [company] needs to get behind them and ensure that the language used falls behind that type of perception.”

Pickersgill concluded: “It is absolutely essential to be intentional about gender diversity, it isn’t just going to happen organically.”

Challenges remain for UK and the UPC: European parliament