The “Gems” of the U.S. Patent and Trademark Office 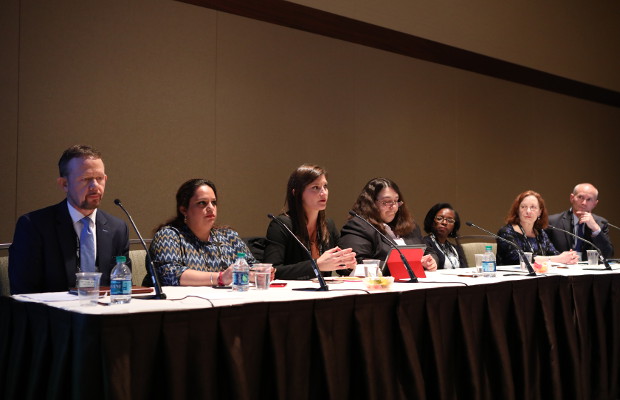 Operating across 10 countries, IP attachés are the international face of the United States Patent and Trademark Office. Sarah Morgan reports on the latest trademark issues facing the attachés across the globe.

“To say there’s been an explosion in legislative initiatives [in Europe over the past few years] is a bit of an understatement,” said Susan Wilson, IP attaché at the United States Patent and Trademark Office (USPTO) (Belgium).

This includes the Digital Single Market initiative, which touches “every area of business” and proposals on copyright affecting publishers and the music industry.

Later this week, on May 25, the EU General Data Protection Regulation (GDPR) will take effect, having a “profound impact on all of your business,” noted Ms. Wilson.

She added that, while this only slightly modifies preexisting regulations, non-compliance carries some heavy penalties.

The GDPR could also affect the flow of information to the WHOIS database of domain name registrant information, a “critical resource for anyone engaged in enforcement.”

“The way that they’re talking about is it that WHOIS will go dark, because registrars will no longer pass information to the database for fear of liability under the new framework,” Ms. Wilson added.

ICANN’s recently approved interim plan for ensuring that the WHOIS registration directory system complies with the regulation does not contain sufficient open access to information. Most data that is relevant to brand owners for enforcement purposes will be hidden without any clear system in place to provide access for legitimate purposes. This will make it much more difficult to track down counterfeiters. INTA believes that ICANN’s approach over-interprets the GDPR to the detriment of consumers.

Ms. Wilson said that her office is also “looking forward to the French presidency of the Group of Seven and possibly reinvigorating the conversation of IP at that level.”

The USPTO’s attachés are one of the “gems” in the office’s structure, acting as “IP experts and diplomats,” stated Shira Perlmutter, Chief Policy Officer and Director of International Affairs at the USPTO (USA)

“They also serve as the eyes and ears [on IP] for all of the United States government,” she added.

Debbie Lashley-Johnson, IP attaché at the USPTO (Geneva) who is focused on the World Trade Organization and World Intellectual Property Organization (WIPO), stated that the United States is continuing to monitor the ability of WIPO’s Lisbon System to be financially self-sufficient and provide greater transparency with respect to the funding of the system.

Bad-faith trademark filings are the number one issue brought to the U.S. consulates in China, according to Mike Mangelson, IP attaché at the USPTO for China and Taiwan (China), though there are reasons to be optimistic.

Laura Hammel, IP attaché at the USPTO for South America (Brazil) outlined the assistance and training the office has offered to IP offices in the region.

“In Brazil and Argentina, there’s been an increased political will to take some action” on enforcement, she said, adding that the United States has supported an action of seizing 880 tons of counterfeit goods worth around US$150 million in the region.

Looking to Asia, Komal Kalha, IP Specialist and Senior Counsel at the USPTO covering India and South Asia (India) noted that India’s Intellectual Property Appellate Board, which hadn’t had a chairman for three years, elected a chair earlier this year.

“I understand that in the last three months, he’s disposed of around 400 cases,” she added.