No love lost: Italy and France clash over image of Venus 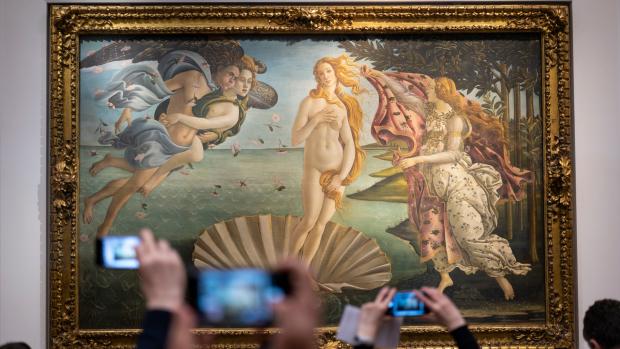 Jean Paul Gaultier’s use of Botticelli’s famous painting on clothing has led to a fascinating dispute between French fashion house and Italian gallery, says Valentina Gazzarri of Bugnion.

It sounds like the beginning of a joke, but it is not. The story is true, and as relevant as ever.

The place where the story takes place is Italy, where people have always breathed not just air, but air impregnated with art!

Art is everywhere: it is in the soil that hides archaeological relics from past ages, in the architectural works that populate both huge cities and remote villages, in food, and in melodies. Of course, it is also in the expressions of some famous painters, such as Sandro Botticelli, the protagonist of the work at stake.

The subject matter of the present dispute is to be identified in “The Birth of Venus”, painted by Botticelli between 1485 and 1486. The painting is known throughout the world and housed in the Uffizi Gallery in Florence. The main figure of this work is represented by Venus, the goddess appearing in all her grace in the middle, nude, with ivory skin and her body criss-crossed by barely perceptible shadows.

This Renaissance painting was reproduced on some items of clothing by French designer Jean Paul Gaultier, in the spring/summer 2022 capsule collection “Le Musée”.

It will be easy to understand that Uffizi Gallery could not remain defenceless. In fact, it promptly addressed a warning letter to the French fashion house in quite conciliatory tones.

Specifically, the latter was invited to withdraw the disputed garments from the market or, alternatively, to sign an agreement that included the recognition that the Uffizi gallery held the rights for the commercialisation of images of Botticelli’s painting.

It is now known to everyone that the rivalry between France and Italy does not end on the football field and that it is lost in the mists of time, but maybe, Jean Paul Gaultier could have given at least an interlocutory answer to the counterpart. Instead, the warning letter was totally ignored and was followed only by press silence.

You know, sometimes silence can trigger an even greater reaction from those whose motives have gone unheard.

Perhaps Chiara Ferragni also contributed to increased frustration of the Tuscan museum, when in September this year, the Italian model and influencer saw fit to publish a post on the social network Instagram in which she showed off her outfit composed of pants and shoes bearing her personal brand, but also a bustier with Botticelli’s well-known Venus depicted on it.

”Maybe, Jean Paul Gaultier could have given at least an interlocutory answer to the counterpart. Instead, the warning letter was totally ignored and was followed only by press silence.”

It was a matter of spontaneous endorsement, for goodness’s sake. Therefore, the model did not have any obligation to point out the commercial nature of the communication, according to the Italian Code of Marketing Communication Self-Regulation and to Italian Competition Law.

However, it will not have escaped many people’s notices that the corset in question was openly marketed by the Spanish company Zara, international leader in the clothing industry! Thus, the outrage at the Uffizi Gallery was carried out by Spain as well.

Zara, no stranger to “hooking” behavior, probably felt legitimised to market a garment that faithfully reproduced the “fantasy” (if one can call it that) of a work of art already taken up in Jean Paul Gaultier’s collection, without thinking that the latter was also committing an illicit act.

As if that were not enough, the affair takes on even more comical traits if one considers that just two years ago Ferragni had been invited by the director of the Italian museum, Eike Schmidt, with the aim of promoting the gallery internationally, and she had been depicted by leading media outlets with her back to the famous “Birth of Venus”.

For the time being, the Florentine Museum has taken legal action only against Jean Paul Gaultier, who is being sued for infringing on the economic exploitation rights to the painting in question.

The rights to artistic works

Did the French designer happen to think that the so-called freedom of panorama is in force in Italy?

This right consists in the possibility of freely reproducing works, even for commercial purposes, without the prior authorisation of the copyright owner, provided that they are placed in open-air locations and visible to all.

This institution would have been provided for in Article 5, Section 3(h) of Directive 2001/29/EC. However, while there are nations such as Germany, Spain and Portugal, which have broadly transposed the content of the aforementioned Directive, to provide for freedom of panorama for buildings and works of art, other countries, such as Italy, do not allow the free reproduction of works if it is for profit.

In Italy, when it comes to cultural heritage—without prejudice to the protection of copyright for works whose author is still alive or has been missing for less than 70 years—the Cultural Heritage Code (Legislative Decree 22.01.2004 No. 42) comes into play.

According to this relevant law, the exploitation is subject to the authorisation of the State, regions, or other public territorial entities that have such property in their care (Art.106). These entities, then, have the power to charge a fee to anyone requesting the reproduction or instrumental use of cultural property for profit.

The concession fee and fees associated with the reproduction of the property are determined according to the parameters defined by the so-called D.l. Art. Bonus (D.l. 31.05.2014 n.83) and transposed in Article 108 of the Cultural Heritage Code, which includes the use and destination of the reproduction, as well as the economic benefits derived to the applicant.

It is to be considered that the Court of Florence, in a ruling dated October 26, 2017, already condemned a travel agency for using the image of Michelangelo’s Statue of David in an advertising brochure and on its website offering, inter alia, a guided tour of the Accademia Gallery in Florence.

In the dispute at stake, the defendant had to pay the plaintiff a sum by way of damages in an amount calculated on the basis of the criterion of the price of consent (that is, what it would have paid had it obtained permission to use the work). On the other hand, no moral damage was awarded, since the unauthorised reproduction of the work, albeit for advertising purposes, had caused any injury to her image.

We do not rule out, however, that this time the outcome of the court proceedings may be different.

The “Birth of Venus” is known to be a work dense with meanings, including the celebration of the birth of a new humanity, and to see it affixed to corsets and camisoles could be considered debasing of its image and that of its author.

We anxiously await to discover the next twists and turns of this new Italy-France chapter!