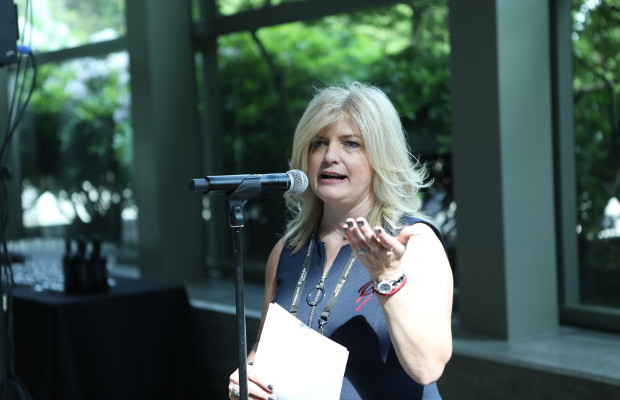 Tish Berard, INTA’s 2018 President, is eager to raise awareness among small to medium-sized enterprises and non-IP professionals about the importance of IP, as she tells Ed Conlon.

Tish Berard (Hearts On Fire Company, LLC, USA), INTA’s 2018 President, says there will be a few surprises when she speaks at the Opening Ceremonies later today.

Ms. Berard began her INTA presidency in January this year. She previously was the Vice President and General Counsel for Hearts On Fire Company, a privately-held diamond jewelry design and manufacturing business based in Boston, Massachusetts, and is currently serving as Hearts On Fire’s INTA designee.

Ms. Berard’s background at a small to medium-sized enterprise (SME), where she was the only legal counsel, is somewhat unusual for an INTA President. She follows a long list of INTA Presidents who have come from major corporations, including Immediate Past President Joe Ferretti (PepsiCo, Inc., USA), 2016 President Ronald van Tuijl (JT International S.A., Switzerland), and 2015 President J. Scott Evans (Adobe Systems, USA).

Being the sole person in charge of legal affairs at Hearts On Fire often required dealing with non-legal specialists, in addition to lawyers, says Ms. Berard. This experience has allowed her, when warranted, to speak in “non-legalese” and focus on what’s important for whichever audience she is working with.

“When speaking with consumers and businesses, there often is a disconnect between what IP is, as explained by us, and what they understand it to be,” says Ms. Berard. That highlights the need for legal professionals to communicate better with those outside the field, she adds.

Asked about INTA’s 2018–2021 Strategic Plan, Ms. Berard says she is focused on all three of its major tenets: promoting the value of trademarks and brands, reinforcing consumer trust, and embracing innovation and change. She adds that all three areas are covered by a 2018 Presidential Task Force—Small-to-Medium Enterprises (SMEs) and Entrepreneurs—she is spearheading.

In the area of SMEs, INTA can become “a major player,” says Ms. Berard. She says INTA needs to educate SMEs and entrepreneurs about IP, especially in an era when new companies can be created much more easily via the Internet. There is a gap between knowing about IP and understanding its importance, particularly in the early stages of a business.

“Often SMEs are focused on raising capital, which is important, but when the brand is left to the end of the process, by then it might be too late—bad-faith actors can prey on or trade off goodwill,” she explains.

"The Presidential Task Force will take a look at the issue, to see what opportunities exist for SMEs, the challenges they face, and what gaps need to be filled, as well as the opportunities to partner with either IP or non-IP organizations."

“The Presidential Task Force will take a look at the issue, to see what opportunities exist for SMEs, the challenges they face, and what gaps need to be filled, as well as the opportunities to partner with either IP or non-IP organizations,” she adds.

The Task Force, composed of experts from around the world, will give periodic updates to the INTA Board, and its goal is to produce a final report and present recommendations in November.

During her tenure as INTA President, Ms. Berard has already spent time with SMEs, including in Singapore and India, and discussed with them some of the challenges around simply getting business people to understand the importance of IP.

“While some lawyers at SMEs understand brands and IP, others might not be as familiar,” she says. She suggests that one solution might be to “train the trainer,” where one person is educated on IP and teaches the rest of the company about it.

Ms. Berard’s role requires that, along with INTA CEO Etienne Sanz de Acedo, she is the face of INTA. Her responsibilities are wide-ranging, including taking part in meetings with government officials, meeting INTA members, and speaking at Association events. She has particularly enjoyed seeing the inner workings of the organization and adds that the Annual Meeting has kept her “extremely busy.”

As INTA’s President, Ms. Berard says, “you always want to keep the momentum going” from the predecessor, in this case, Mr. Ferretti.

Among INTA’s policy priorities specified in the 2018-2021 Strategic Plan are (1) global harmonization (2) counterfeiting (3) Internet, (4) brand restrictions, and (5) better understanding about the value of IP.

“Many of our efforts begin with awareness raising,” she says, “and we collaborate with key stakeholders, including government officials, to address these issues.”

At the moment, she says, brand owners should be cognizant of the potential impact of brand restrictions, the Internet Corporation for Assigned Names and Numbers (ICANN), and Brexit.

On the first issue, Ms. Berard notes that while brand restrictions—legislative restraints on the ability to display trademarks, also known as plain packaging—started in the tobacco industry, they are spreading elsewhere, including to baby formula products (in South Africa) and sugary snacks (in numerous countries). There are even concerns about toys being affected, she adds.

“We want regulators to take an informed approach. Right now regulators are thinking about a perceived benefit—potentially decreasing certain behavior—but they are doing so without taking into account the impact on IP rights, gross domestic product, the workforce, and consumer protection,” she says.

Regarding ICANN, INTA is concerned about trademark owners’ access to the WHOIS database of domain name registrant information after May 25 when the EU General Data Protection Regulation (GDPR) takes effect.
According to INTA, ICANN’s recently approved interim plan for ensuring that the WHOIS registration directory system complies with the regulation does not contain sufficient open access to information. Most data that is relevant to brand owners for enforcement purposes will be hidden without any clear system in place to provide access for legitimate purposes. This will make it much more difficult to track down counterfeiters. INTA believes that ICANN’s approach over-interprets the GDPR to the detriment of consumers.
Brexit requires more of a “wait and see” approach, Ms. Berard says, as the major details concerning IP still need to be fleshed out. INTA is advocating that the European Union and the United Kingdom both support, promote, and safeguard the following core principles for brand owners and right holders during the negotiations, as well as when Brexit becomes effective: minimal disruption of trade, minimum costs, maximum retention of rights, and maximum transparency and legal clarity.

INTA has grown “quite a bit” since Ms. Berard became a member in 1999.

“When I started it was much smaller,” she says. Since, “INTA’s thinking has expanded, trying to look at things from a different perspective and how things are changing for our members.

“There are more issues for members to focus on now and there is more work than ever to be done. We’re taking a forward-thinking approach.”

Ms. Berard says INTA’s Brands and Innovation conference in New York, New York, which took place in March, was a “great example” of this approach, with topics covering hot-button issues such as artificial intelligence and bitcoin.

“These concepts are becoming part of brands’ lives, but are not necessarily things that impact you right now. Companies need to be thinking about what’s coming next,” she suggests.

With that in mind, Annual Meeting registrants should head to the Opening Ceremonies at 4:30 pm to hear Ms. Berard speak about the most pressing IP issues for the next 12 months and beyond.