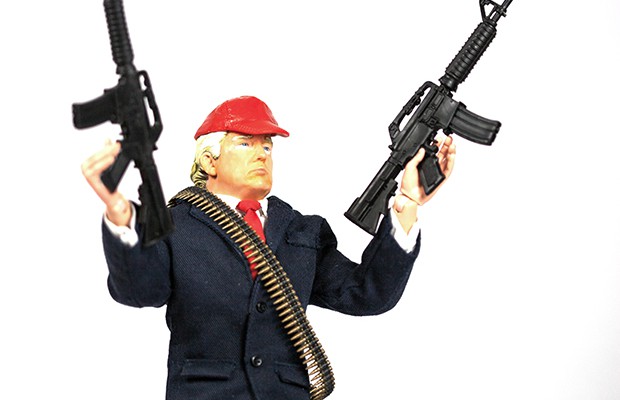 As the US and China remain at trade loggerheads, WIPR investigates whether the Trump administration is overreaching the scope of its trade tools in its fight against Chinese bad actors.

The message from the US trade department was clear: China’s government has used discriminatory licensing requirements to transfer technologies from US to Chinese companies and conducted cyber intrusions into US corporations.

That’s according to March 2018’s US Trade Representative (USTR) section 301 report into “China’s Acts and Policies on IP, Technology Transfer and Innovation”.

"It’s not costing taxpayer money for Chinese applicants to file for trademarks and it is funnelling money from the Chinese to the US government." - Todd Sullivan, Hayes Soloway

The report, which stoked the flames of US President Donald Trump’s China IP theft rhetoric, spurred the use of section 301 as a trade tool to force negotiations.

Section 301 is used to enforce the US’s rights under trade agreements and to address ‘unfair’ foreign barriers which burdens or restricts US commerce.

For Stephen Kho, partner in Akin Gump’s Washington, DC office, section 301 is a tool of last resort, to be used when there are no other trade agreements or other negotiation options in place.

“Not only has the Trump administration started to use section 301 in places where trade agreements exist, but they are also using it to extend the US’s authority,” claims Kho.

David Hickerson, a Foley & Lardner partner based in Washington DC, also believes 301 is being used to exert influence, saying: “If Trump imposes tariffs on all Chinese imports, as has been threatened, this will be an overreach of section 301.

"The USTR is using the section for all trade agreement enforcement, which isn’t conducive for building longterm trade relations with any country." - Stephen Kho, Akin Gump

“The administration would not only be targeting the goods falling in the areas where the USTR has identified problems (such as forced transfer or theft of trade secrets), it would be targeting virtually every Chinese import. This is a bully tactic,” he says.

The two lawyers agree that the use of section 301 on one issue of IP in relation to China has been expanded to cover all trade between the countries.

“The overuse of section 301 cheapens it. The USTR is using the section for all trade agreement enforcement, which isn’t conducive for building long-term trade relations with any country,”
cautions Kho.

This use of section 301 supports the idea that the Trump administration looks at all of the US’s trade and legal enforcement tools as negotiation instruments.

Unfortunately, this approach “sends mixed signals” according to Kho, who adds that the attitude “implies everything is negotiable, even issues such as due process”.

Ed Lebow, counsel at Haynes Boone in Washington, DC, disagrees that the USTR has overextended the usage of section 301.

“However, the administration’s unilateral approach will likely be no more effective than a multilateral approach that would not have cost us so much loss of goodwill from our erstwhile allies,” he cautions.

Lebow says there’s nothing wrong per se with looking at trade enforcement actions for their negotiating leverage, but the problem is when the wrong vehicle is used.

“In particular, the use of section 232 national security tariffs to raise the price of imported steel is inappropriate, as there is no way that imports from allies such as Canada can sensibly be construed as a threat to US national security,” he says.

While Lebow says that the use of section 301 as a way to force the Chinese to negotiate seriously isn’t totally inappropriate, he would have preferred that the US had signed the Trans-Pacific Partnership and worked multilaterally to pressure the Chinese to cease their “clearly unfair trade practices”.

Turning to the International Trade Commission’s (ITC) remit, section 337 has form when it comes
to China.

“Over the last two decades, section 337 has really targeted Chinese companies. The number of cases filed against Chinese respondents exceeds the number of ITC filings against respondents from all other countries (excluding the US) combined,” adds Hickerson.

However, he notes, while Trump has not packed the ITC with his pick of commissioners, there’s still time for him to nominate those most likely to conform with his protectionist policies.

The ITC’s March 2018 decision to terminate its investigation into imports of certain carbon and alloy steel products from China for alleged violation of antitrust laws supports the argument that the Trump administration is not yet influencing the ITC’s practice in section 337 cases.

Complaints involving misappropriation of trade secrets are a real area of growth for section 337, adds Hickerson, given the USTR’s finding in its section 301 report that China has sought to obtain trade secrets and other confidential business information from US companies.

This feeds into the US Department of Justice’s (DoJ) newly-launched China Initiative, aimed at identifying priority Chinese trade theft cases. The plan also aims to ensure the DoJ can dedicate enough resources to cases and provides they are brought to conclusion quickly and effectively.

This intense focus on its rival superpower is all the more profound when compared to previous years. Between 2013 to 2016, the DoJ didn’t charge anyone with spying for China. This changed in 2017; since then, the department has charged several individuals with espionage on behalf of the Chinese state, or attempting/conspiring to do so.

The US Patent and Trademark Office (USPTO) is also attempting to stem the alleged tide of Chinese bad actors in the trademark sector, although less overtly. In February, the office issued a proposal which would require foreign-domiciled trademark applicants and registrants to use a US attorney.

The proposal comes in response to the growing problem of foreign trademark applicants who purportedly act pro se (where the applicant represents him/herself) and are filing inaccurate and possibly fraudulent submissions.

It appears that a number of these filings stem from China. Robert LeBlanc, a Dallas-based Haynes and
Boone partner, says: “If it weren’t politically taboo, there could be a section header in the rule change that reads ‘The USPTO is seeking to curtail problematic Chinese filings’.”

“In 2016 and 2017, Chinese nationals in residential and even rural areas of the US were being named as the filing correspondent for large volumes of US trademark applications filed for China-based applicants,” says Robert Reading, London-based director of custom and managed solutions at CompuMark, a Clarivate Analytics unit.

Ying Ayala, an individual who appeared to be based in Edinburgh, Texas, was the filing correspondent for more than 700 US trademark applications filed in early 2017 by China-based applicants. This, according to Reading, is more applications than handled by most major US law firms.

Later in 2017, the bulk of Ayala’s ‘portfolio’ was transferred to Amber Saunders at Saunders Law Group (SLG) in Atlanta, Georgia.

This propelled SLG into the top 30 of all law firm representatives for US trademark applications, a development that received national attention.

A check of the US trademark register shows that less than one year after the article was published, SLG is no longer the agent of record for these trademark records, says Reading. The firm’s website suggests it is not currently trading or accepting clients.

The ‘portfolio’ has been on the move again, this time to William Goldman of Goldman Law Group in Washington, DC, according to Reading.

WIPR reached out to Goldman, who said: “Since taking over the portfolio, approval rates have skyrocketed, leveraging our almost 30 years of trademark experience and solid working relationships with various examining attorneys.

“In fact, we’ve been expanding our offerings, currently accepting new trademark and intellectual property clients from China, throughout the US and worldwide.”

Clarivate’s US database lists Goldman as the agent of record for 2,786 US trademarks. The majority (2,735) of these belong to Chinese owners, with nearly 1,100 applications filed in 2018 alone.

“This would comfortably put Goldman in the top ten US attorneys last year by filing volume,” adds Reading.

As part of a national effort to drive growth and IP ownership, China’s provincial governments began paying citizens for each trademark registered in the US, in some cases paying $790 for each US trademark application, according to reports.

Requiring the use of a US attorney would diminish the economic incentive for trademark application filings by non-US entities, according to Todd Sullivan, managing partner of Hayes Soloway’s New Hampshire office.

“At the same time, I don’t think these pro se filings by Chinese citizens were a big deal. The Chinese applicants were not filing trademark applications that anyone else wanted,” he notes.

Without any economic incentive, this practice is sure to lose its lustre, adds LeBlanc.

“It would be like Chinese citizens buying WIPR subscriptions because the government is offering to reimburse them 200% of the subscription fee. Would WIPR create extra costs to deter subscriptions? No, you’d find ways to solicit more in China and get every citizen signed up,” comments Sullivan.

Sullivan thinks it would be a bigger issue if the applicants were squatting on a desirable/useful mark and leveraging it against a rightful owner, but he says this isn’t the case.

One of the trademarks he’s come across was simply a number of consecutive consonants that had no known meaning in any language or acronym.

As the USPTO is a for-profit enterprise, the Hayes Soloway partner thinks the proposed rule change is an unnecessary expense.

“It’s not costing taxpayer money for Chinese applicants to file for trademarks and it is funnelling money from the Chinese to the US government, so it is odd for them to stand up,” he says.

For the past few years, LeBlanc has counselled clients regarding this Chinese government-backed practice.

“My clients are generally much more willing to oppose applications that appear to be made simply to receive a payment from the Chinese government,
since it is almost certain that the applicant will not respond to the opposition and default will occur,”
he says.

The filing situation in Europe is similar, with substantial filing volume from China. In 2018, China overtook the US in 2018 as the largest foreign source of EU trademark applications.

However, in the EU, the European Union Intellectual Property Office requires that the representative for an EU trademark be a registered EU trademark attorney.

“If the experience in the EU is any guide, the impact in the US may have unexpected consequences,” claims Reading.

“Chinese applicants tend to avoid traditional large law firms in Europe and instead have funnelled filing work through a new network of previously low profile small firms in low cost countries, or individual practitioners,” he adds.

Following the USPTO’s warning, the office was forced to warn trademark attorneys after learning that lawyers had received foreign solicitations for their information. The emails originated largely from “people in China, and perhaps elsewhere”, the USPTO said.

While none of the lawyers spoken to has received such a request, all were emphatic that it would be a very dangerous career proposition to allow someone to use your name on any kind of legal filing.

It appears IP has become a proxy battleground between the world’s two great powers. With China pursuing a shift to an innovation economy and a protectionist US president willing to leverage almost anything to curtail ‘threats’ to US dominance, it is likely to remain that way for some time. Rights owners, however, may find themselves as collateral damage.