The first stage is interpretation of patent scope, while the second stage requires comparison between the entire patented design with the corresponding scope of the accused design employed on the allegedly infringing article. The second stage can be further divided into four steps, which are:

Deciding whether the articles on which the two designs applied are identical or similar;

Determining whether the two appearances are identical or similar; and

Checking whether any defence is available.

The latter three steps are not necessarily carried out in the given numbered order. A court may rule for non-infringement even without analysing the degree of similarity or identity when a defence has been entered.

The principle of patent scope interpretation

The patent scope of a claimed design is dependent on the drawings; the description may be considered as a reference only. The patented design should be identified as an integration of the shapes, patterns, and colours that are disclosed by all views in the drawings. Each feature should be considered even if it is invisible during usage or is functional, except when it is merely functional.

The allegedly infringing article should be compared with the corresponding scope of the patented design, excluding irrelevant areas.

Tests for comparison and determination

Essentially, articles with the same uses are the “same articles”, whereas articles with similar uses are “similar articles”. While “identical appearance” means complete consistency and conformity of the shape, pattern and colour between the accused and the patented design, “similar appearance” suggests the overall appearances of the two designs embrace no substantial difference. There are three approaches for comparison, as follows:

An ordinary consumer is required to observe directly via the naked eye without the aid of instruments;

b.         Overall observation and integrative determination:

First observe and compare the design features of the two in order to analyse the difference, and then consider the contribution of all features to the entire design concept through the viewpoint of an ordinary consumer; and

This is a new and auxiliary method for determining similarity. Methodologically this approach analyses the degrees of similarity among the “patented design”, the “accused design”, and the “closest prior art.” It applies when the accused design and the patent are not plainly similar, or it is unclear whether they are similar. 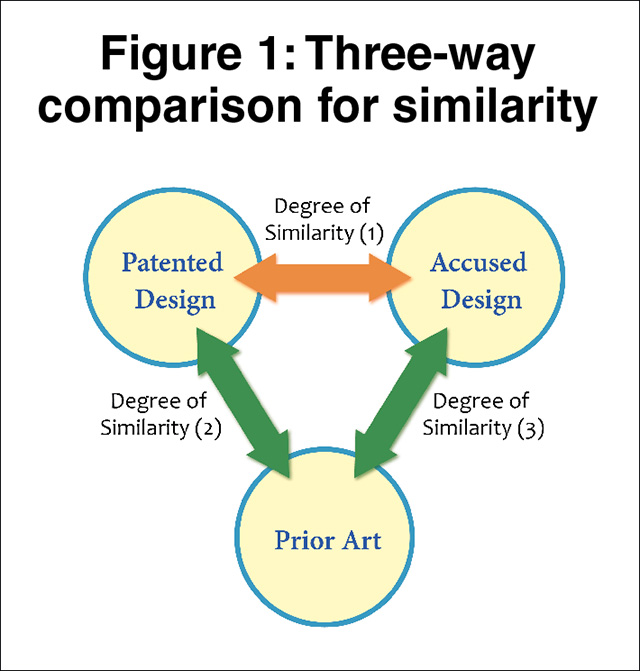 Available defences at trial are prosecution history estoppel or prior art defence. In the former case, relevant evidence demonstrates whether the scope of similarity was ever restricted, denounced, or precluded by the applicant/patentee during patent prosecution or enforcement. In the latter situation, the accused design is similar or identical to prior art.

The directions are substantially modified to stay aligned with the current Patent Act. As an administrative regulation, the directions may not bind the judicial powers. Nevertheless it serves as a good reference for the courts, litigating parties, and all interested individuals.

Crystal Chen is a partner and attorney at law at Tsai, Lee & Chen. She can be contacted at: cjchen@tsailee.com.tw