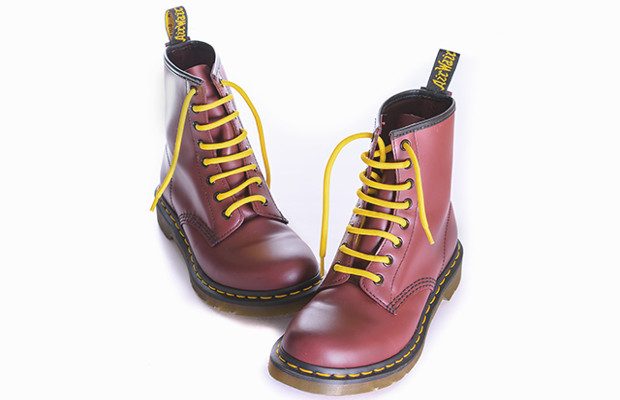 From humble beginnings in the UK, footwear brand Dr Martens is now an international operator and must coordinate action across the globe to tackle IP infringement. WIPR found out more during a guided tour of the company’s factory in the UK.

For many global brands a multi-storey complex in the heart of one of the world’s major cities is what they call home. Their base is a sign of power, where their ideas are born, and products are designed and tested before being marketed around the world.

Despite Dr Martens’ rigorous designing and testing procedures, there are no glitzy high-rises at this company, which prides itself on humble beginnings and its work before becoming the brand you see today.

After arriving by train at a small town in England’s Northamptonshire region, WIPR was taken by taxi to the company’s headquarters in a sleepy village named Wollaston.

It was here, in a modest looking factory with its recently added museum on the edge of the village, that the first Dr Martens shoes were created by local family-owned company R Griggs and Co.

It’s not quite what you would expect from one of the world’s most recognisable shoe companies, especially one that was synonymous with the UK’s ‘skinhead’ movement in previous years.

Charlotte Hagan (pictured below), the company’s intellectual property manager, tells WIPR it’s a “down to earth” company that stays true to its family-orientated origins. 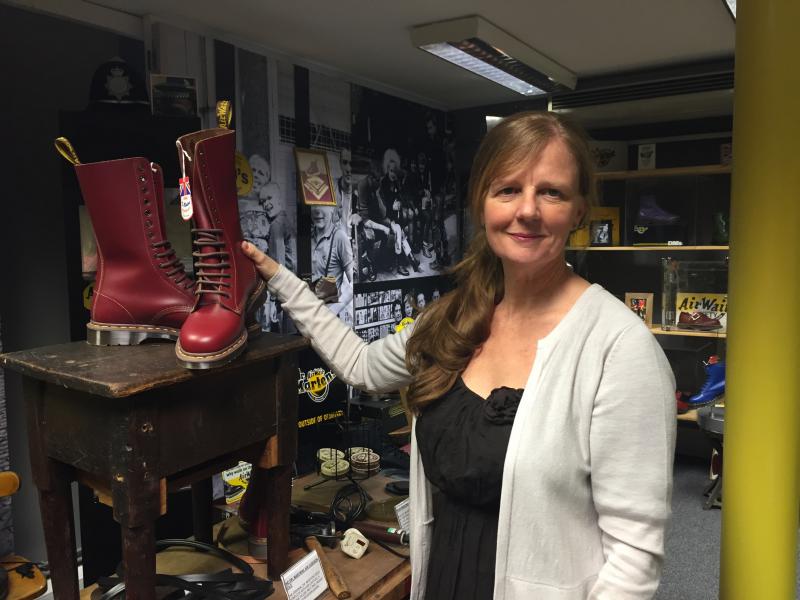 She adds that it was only at the end of the 1980s that the brand started to be advertised more broadly, and as a result IP issues began to increase.

Dr Martens’ signature product, the handmade 1460 boot, which is part of the Made in England range, was launched by the group on April 1, 1960.

It was and continues to be the company’s most recognisable product. Apart from a one-year hiatus in the early 2000s, it has always been made in the Wollaston factory.

The Airwair brand is just one of several thousand global trademarks that require protecting and monitoring.

As IP manager, its Hagan’s job to ensure that these marks, and all other Dr Martens products, are protected from infringement across the globe.

“We are at the centre of the IP web,” she says of the UK-based IP team, “and although much of our work is carried out behind the scenes on portfolio and enforcement activities, we have a broad remit and work closely with many areas of the business.”

This includes working with the design and development team to identify and protect IP, as well as international subsidiary offices and distribution departments.

“Our marks include a cross-section of rights including word marks, logos and the iconic configuration of our footwear—which was designed by us in the late 1950s and has been associated with our brand since April 1, 1960,” she says.

“These marks cover a whole range of classes which extend globally and include obvious areas such as footwear and associated items, as well as other clothing and fashion accessories.”

She claims that Dr Martens’ footwear is unique in the market, and mentions a number of trade dress features that are now “internationally recognised” by consumers to identify genuine Dr Martens products.

“This includes the two-toned grooved sole edge, yellow welt stitch, the DMS sole pattern, and overall configuration of our iconic footwear,” she says.

The story of how Dr Martens came to where it is today can be traced to World War II. Near the end of the conflict, Klaus Märtens, a doctor during the war, injured his foot while skiing on leave.

During his recovery period he found that his boots were uncomfortable and designed improvements which included using soft leather and air-padded soles made from tyres.

He later went into business with an old friend called Herbert Funck. By 1959 the pair were looking to market the footwear to a wider audience. In that year the Wollaston-based Griggs Group bought the patent rights to manufacture the shoes in the UK, anglicised the name, added Dr Martens’ now signature yellow stitching to the shoes and began producing the well-known products.

Over the next few decades the Griggs company expanded and factory work was outsourced abroad. Today it is only the company’s Made in England range that is manufactured at Dr Martens’ spiritual home. Other footwear lines and miscellaneous items including bags and belts are manufactured in Asia.

"China is particularly important: we are focusing our efforts to address infringement online and through on-the-ground and bricks-and-mortar distribution channels.”

“Our footwear has evolved from a humble work boot originally launched in Northamptonshire on April 1, 1960 to an international symbol for individual identity,” Hagan explains as she takes WIPR on a guided tour of the factory.

The factory itself, rather like the whole complex, is smaller and more basic than you would imagine. There are no state-of-the art machines producing batch upon batch of shoes. Everything is done by hand by meticulous workers skilled in their trade and each taking pride in his or her contribution to the finished product.

First, sheets of leather are cut into the outline of the boots; these are then moulded into shape, before the yellow stitching and two-toned grooved sole, also trademarked, are added to the design.

To protect what has become a global brand, action is needed around the world. As is often the case, some jurisdictions prove more troublesome than others, with China being a good example.

“Enforcement initiatives take place in many countries and span all channels of supply and distribution. As necessary, action is taken against manufacturers and sellers of infringing products, or against third parties misusing our IP,” she says.

The challenge posed to Dr Martens by China, says Hagan, centres not only on physical counterfeits bought in person but also those obtained online.

“Asia is a key focus for enforcement action. We work with a number of experienced IP providers throughout the region to tackle infringement. China is particularly important: we are focusing our efforts to address infringement online and through on-the-ground and bricks-and-mortar distribution channels.”

Websites including Alibaba and its subsidiaries have proved problematic for many brand owners over the last few years with imitations purporting to be genuine brands appearing on the platforms.

Despite this, Hagan says, there have been some signs of improvement.

“Some improvement has been seen in recent years with successfully enforcing IP rights in China. Working with the right partners for your brand and proper coordination of on-the-ground investigation, online activity and enforcement is critical to building a clear strategy and taking effective action,” she says.

She adds that, when looking to police the company’s IP, rather than being tied to one firm the company works closely with international colleagues in the US, Europe and Asia, and with specialist law firms in a number of other markets.

“We work with recommended law firms in each territory and prefer this to being allied to one global firm. We always strive to build long-term and strong working relationships with all our advisers.

“The knowledge base between the firm and ourselves is thorough and helpful, and means that our lawyers are close to the market and often find and identify infringement and act swiftly to resolve issues.

She adds that the IP department in the UK represents “the tip of the iceberg” in terms of the work carried out.

“The action taken depends on the issue and the jurisdiction concerned. It is not possible to give a sweeping statement about the type of action taken in all cases, as each issue is reviewed individually.”

One notable case involving Dr Martens (which didn’t come from China) was resolved at the English High Court in 2003.

In the case, R Griggs & Co and Airwair v Ross Evans, Raben Footwear, Ronny Leopold Lewy and Garry Lewy, the court was asked to tackle the question of who owned the copyright to the design used in a trademarked logo.

Griggs (Dr Martens) made and sold boots all of which bore the ‘Dr Martens’ trademark as well as a second trademark for the term ‘Airwair’.

The other named defendants took an assignment of copyright from Evans on the basis that he, not Griggs, was the first owner of the copyright to the logo.

Griggs sought a declaration that it was the owner of the copyright, and Mr Prescott QC sided with Griggs.

Although Evans was the legal owner when he initially created the logo, ownership rights then transferred to the company, Prescott ruled. Evans received his normal hourly rate to create the combined logo and did not prove that the amount he expected to be paid would be affected by how often the logo would be used.

The court ruled that the right to use the logo and exclude others from using it belonged to Griggs.

Although online brand abuse is common, with thousands of infringements detected by brands around the world every day, the public’s response to being saddled with a counterfeit product is often surprising, Hagan continues.

In many cases consumers have contacted Dr Martens directly if they have bought a fake product that they believed was genuine.

“Consumers are of course disappointed if they have purchased a product which, either through the quality or the comfort of the item, is not up to standard, and they come to tell us straight away if they have concerns about authenticity.

“Often they are keen to share information with us about their buying experience and the source of the goods. We regard this as very positive; it shows that consumers have a loyalty to the brand and they know what to expect from our footwear.”

Loyalty to the brand is commonplace at Dr Martens. The family-orientated roots and pride in the traditional factory-based method of preparing the Made in England range is testament to that.

“I get enormous satisfaction from working to protect our iconic British brand, which is widely recognised around the world,” Hagan says.

While protecting IP is undeniably tough and presents its problems, it’s clear that the task is made more enjoyable when the work takes pride of place.