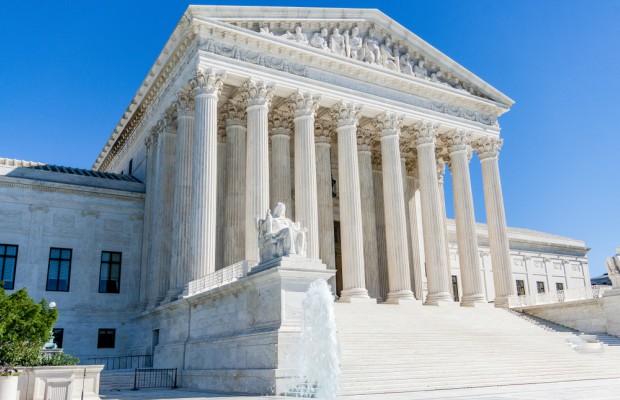 SCOTUS has refused to review a constitutional challenge to reviews at the Patent Trial and Appeal Board, affirming an earlier decision holding that a patent is not private property. David McCombs, Eugene Goryunov, Jonathan Bowser, and Judy He of Haynes and Boone report.

The US Supreme Court denied writ of certiorari in Christy v US (2021), declining to consider a constitutional challenge under the Fifth Amendment’s “Takings Clause” to Patent Trial and Appeal Board (PTAB) post-grant review proceedings.

This leaves in place decisions by the Court of Appeals for the Federal Circuit as controlling law. Consequently, this article reviews Takings Clause-based constitutional challenges to America Invents Act (AIA) post-grant proceedings.

These proceedings allow the PTAB to review the patentability of one or more issued patent claims challenged by a petitioner. IPR proceedings have proved to be a popular tool for petitioners, often used in response to a patent infringement litigation. More than 12,000 IPR petitions have been filed since IPRs first became available.

In Oil States Energy Services v Greene’s Energy Group (2018) the US Supreme Court held that IPR “falls squarely within the public-rights doctrine,” that patents are “public franchises,” and that IPR proceedings do not violate Article III or the Seventh Amendment. The court, however, “emphasi[s]e[d] the narrowness of [its] holding” and cautioned that its “decision should not be misconstrued as suggesting that patents are not property for purposes of the due process clause or the Takings Clause”.

The Takings Clause of the Fifth Amendment provides that “private property [shall not] be taken for public use, without just compensation.” Since Oil States, some patent owners who lost patent rights in an AIA post-grant review proceeding, eg, an IPR, have challenged the constitutionality of the scheme under the Takings Clause.

The first type of challenge focuses on the “takings” portion of the Takings Clause that private property shall not be taken for public use. Such challenges question whether pre-AIA patents may be challenged and held unpatentable in an IPR (an AIA construct), thereby taking away the property of the patent owner and placing it into the public domain.

In Celgene Corp v Peter (2019), the patent owner argued “that the retroactive application of IPRs to their pre-AIA patents without just compensation is an unconstitutional taking under the Fifth Amendment” because “subjecting its pre-AIA patents to IPR, a procedure that did not exist at the time its patents issued, unfairly interferes with its reasonable investment-backed expectations without just compensation.” The Federal Circuit disagreed.

“Patent owners making this constitutional challenge have argued that they are entitled to compensation for losing patent rights because the PTAB found some or all of their claims unpatentable.”

It held that: “Patent owners have always had the expectation that the validity of patents could be challenged in district courts. For 40 years, patent owners have also had the expectation that the PTO could reconsider the validity of issued patents on particular grounds, applying a preponderance of the evidence standard. Although differences exist between IPRs and their reexamination predecessors, those differences do not outweigh the similarities of purpose and substance and, at least for that reason, do not effectuate a taking of Celgene’s patents.”

The second type of challenge focuses on the “just compensation” portion of the Takings Clause that holds private property shall not be taken for public use without just compensation. Patent owners making this constitutional challenge have argued that they are entitled to compensation for losing patent rights because the PTAB found some or all of their claims unpatentable.

According to the Federal Circuit, the answer is “no”. In Christy, the patent owner filed a class action lawsuit against the government in the Court of Federal Claims, seeking various forms of compensation for the PTAB finding its patent claims unpatentable.

The requested compensation included reimbursement of the issuance and maintenance fees the patent owner paid to the government, business investments made in the once-patented technologies, attorney fees incurred by defending the patent at the PTAB, and the value of the now-unpatentable patent claims themselves—such as expected royalties and other related payments.

On January 21, 2021, the patent owner filed a petition for a writ of certiorari to the US Supreme Court, arguing that Celgene was a “mistake” supported by inapposite case law. The government waived a response, and Christy’s petition was denied on February 22, 2021.

The current state of the law (from the Federal Circuit) is that the PTAB finding patent claims unpatentable is not a taking under the Takings Clause and does not require just compensation to the patent owner.

In Christy, the Federal Circuit found that “the cancellation of [patent owner’s] patent claims in an inter partes review was not a Fifth Amendment taking,” and “no statute, regulation, or constitutional provision compel[s] the fees’ refund if claims are later cancelled in post-issuance proceedings.”

In view of this reasoning, and the Supreme Court’s denial of certiorari in Christy, it appears that a patent is not private property or, at least, that a patent invalidated by the PTAB is not being taken for public use—no matter what type of property a patent may be.

David McCombs is a partner at Haynes and Boone in Dallas. He can be contacted at david.mccombs@haynesboone.com

Eugene Goryunov is a partner at Haynes and Boone in Chicago. He can be contacted at eugene.goryunov@haynesboone.com

Jonathan Bowser is counsel at Haynes and Boone in Washington, DC. He can be contacted at jonathan.bowser@haynesboone.com

Judy He is an associate at Haynes and Boone in Chicago. She can be contacted at judy.he@haynesboone.com

Disclaimer: This publication reflects only the author(s)’ present personal opinions and views, which should not be attributed to the author(s)’ law firm, or former or present clients.