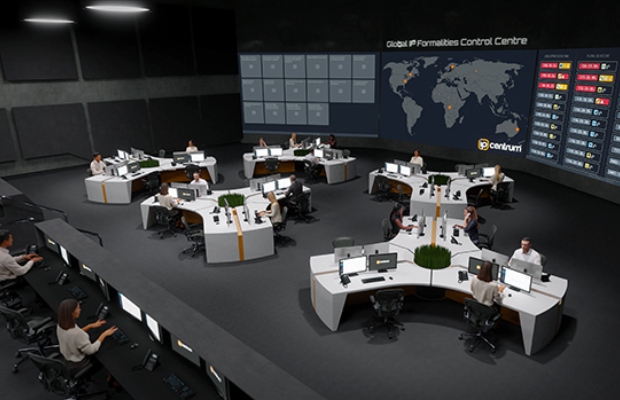 Growing without sacrificing quality is a challenge facing all ambitious companies. As IP Centrum moves into patent renewals in earnest, the company is addressing that challenge head-on, as WIPR finds out.

It looks like the lair of a Bond baddie, or perhaps more like NASA mission control. There are countdown clocks, giant maps of the world, flashing lights and a sleek design. There are also not very many desks.

Although this will eventually be a real operations room, it’s also the metaphorical embodiment of something that could be genuinely revolutionary: the physical architecture that underpins and represents a business, software and operational architecture designed for maximum performance.

IP Centrum seems to be aiming for nothing less than world domination—the ability to manage more renewals and validations instructions than anyone else in the market, and to do so with 100% success. As an ambition, it’s laudable; in practice, it’s difficult—the patent renewals operations launched last month after five years of preparation (initial plans were to do it in nine months). The operations room is the front end of this effort, the place at which software, people and the actual client work meet.

Internally, it’s called the Lava Lake, and ultimately, it’s designed to facilitate scale and accuracy in tandem. The aim is to begin building soon, but in the meantime there’s a miniature version of the room, known as the Lava Puddle, in the company’s Birmingham offices.

There are several major challenges to running a successful renewals business, but perhaps chief among them is the sheer quantity of things that could feasibly go wrong per instruction, which when multiplied by the potentially huge number of matters under way at a given time, creates an organisational puzzle.

The challenge, especially for newer players in the market who are unlikely to be able to compete with the larger players on the basis of manpower even if they wanted to, is how to scale operations without risking the accuracy of the work.

"This approach generates over 250 times scaling compared to its major competitors— for every operations person it has, another company would need at least 250 to do the same work."

Automation can play a large part of course, but at present even the most sophisticated software solution can’t effectively handle things going wrong, and perhaps more importantly, can’t exercise judgement outside whatever parameters its programmers have given it. In short, software doesn’t know how to deal with what it doesn’t know.

It is by designing software that can do that, and in fact doing it separately, twice, that IP Centrum hopes to ensure the that fail-safes in the operational scaling are foolproof. With a given matter running through the system, two separate software modules handle it at the same time. If what they come up with matches (and that matching is checked by a separate software module), then it’s good to go. If there’s any anomaly at any point, it’s flagged for human intervention.

IP Centrum estimates this approach generates over 250 times scaling compared to its major competitors—for every operations person it has, another company would need at least 250 to do the same work.

When put like that, it sounds ludicrous. As with anything, the proof will be in the pudding (and of course, if doing the work becomes the easy part, getting that work may be more difficult). The interesting thing about all this is not so much that it’s quite clever—lots of things are quite clever—it’s more about why anyone would spend the energy producing something so difficult.

IP Centrum seems quite an odd environment, in which obsession with detail permeates the culture, so that the coffee beans it uses for staff coffee are the product of road-testing different beans, different roasting techniques and different storage options.

"The operations room is the front end of this effort, the place at which software, people and the actual client work meet."

As with the product as a whole, all this has potential to be just a waste of energy—something that creates the impression of precision rather than the thing itself. IP Centrum claims its solution to this, if it is a solution, is to let the product do the talking. There is currently no sales team in the business, for example, although that approach seems likely to be tested as the company tries to scale.

It is certainly possible that the extreme lengths the company seems to have gone to in order to build this way of working, even in service of a noble aim (it says it wants to have a zero failure rate, in perpetuity), will be for nought. It’s all very well championing a company culture in which staff get free haircuts, Michelin-quality food in the office and unlimited holidays, but culture doesn’t pay the bills.

There are really only two ways to build a new business in a mature market. The first is to imitate the processes, the model and the organisational structure of the incumbents, and do those better than they do. This approach can work—keenness and leanness will take you a long way—but as a company grows, it ensures that it is faced with predictable choices.

At some point it will likely come down to a decision about whether to take external investment to enable scale and marketing clout, or whether to stay satisfied with incremental growth and essentially hope that one of the bigger players buys you. There is nothing wrong with this approach. It’s safer, and it has worked for far more businesses than any other method.

The other way to do it is to look at the models of provision, process and delivery in the marketplace and investigate why those norms exist and whether they’re the best norms they can be. In most markets, especially where technology is a factor, the answer will be no.

There’s almost no chance that mature markets (and mature companies within them), which by definition came into being before technological power was anywhere near what it is today, will in general be operating in an optimum way. It is possible to innovate in large, established companies, but it’s difficult, in part because successful, established operations don’t typically want to change a winning formula.

Here then, lies the opportunity for the smaller, younger business. Challenge the norms, reinvent the wheel, interrogate every assumption.

That’s what IP Centrum is trying to do. It’s a high-wire act, and risks spectacular failure, or even worse, non-spectacular failure. But if it works, it will have a huge impact. The challenge is that there can’t be any guarantee that it will work until it does.

There are large, established players in the market. There are patterns of doing business that go back decades. Trying to build a new way of conducting a whole business is not only very difficult, there’s a risk that, even if you do it, and even if it works, that no-one really cares, either because you can’t reach them or because it’s just not as important to them as you think it is.

The Lava Lake is a practical solution to a real-world problem: how to increase capacity without swamping headcount or compromising delivery, but it’s also interesting for what it says about how a small company sees itself and what it’s trying to achieve.